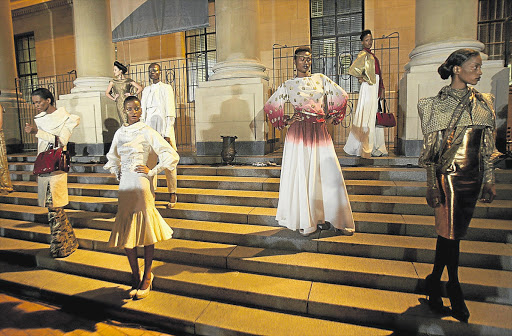 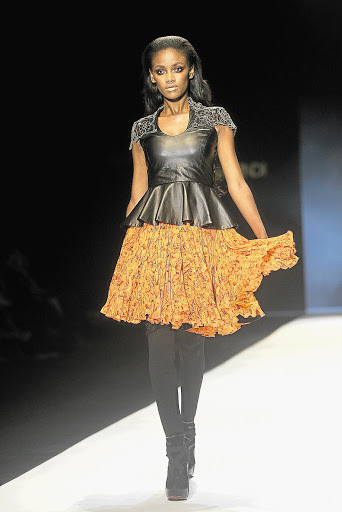 IN TRUE David Tlale style, the avant garde designer put on a show that left many gaping at this week's Mercedes Benz Fashion week. Tlale showcased his Decadence Autumn Winter Collection at the offsite venue, the Gauteng Legislature Piazza.

His show surprisingly started on time, with guests having to collect their tickets almost two hours before 7.45pm. No ramp, no music, or chairs for the audience to sit on - the normal hullabaloo that is standard with fashion shows.

Instead his leggy models, decked out in his signature elaborate garments, stood on the stairs of the Legislature like mannequins. While former Miss SA, Tatum Keshwar, sat on a chair fit for a Queen.

There were mixed reactions from the crowd who were not to sure what was happening. "What's going on here, what the heck is this? When is the show going to start or is this it?'' were some of the comments.

But choreographer and drag queen extraodinaire Somizi Mhlongo almost stole the limelight from Tlale with his rather conspicuous attire - a long black frilled looking thing - ironically designed by Tlale.

Fellow designer, Paledi Segapo, said Tlale has again shown that he is indeed a trendsetter.

"Installations are quite popular abroad and David is keeping up to date with international trends.

"I also admire this creation because it gives the audience so much more time to appreciate the fashion on offer and to admire the impeccable detail and workmanship. Well done!''

Celebrities came out in their masses to support Tlale as well as Thula Sindi whose showcase was scheduled to start at 9pm at Mary Fitzgerald Square.

Many were concerned though that Sindi's show would be sabotaged because everyone was at the Tlale show. But thankfully everything went according to plan. Sindi's slot was moved 15 minutes later and busses pulled up to ferry guests to the show which was a huge success - the tent was packed.

Sindi unveiled his look book - Women of Consequence - showing off the likes of Connie Ferguson and Bonnie Henna. But his collection was met with different reactions, with some thinking he has lost the plot due to a few oddly paired items on the ramp.