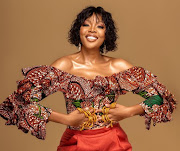 With the belief that street food in SA has not been well represented on a global scale, fashionista and television chef Nthabiseng Ramaboa, better known as Chef Nti, hopes to use her new cooking show as a platform to help document different African cuisine for future generations.

Set to air on Food Network later this month,Street Food in Africa is set to prove that local is indeed lekker as she takes viewers on a journey around cities and townships across the country.

In the episodes, Chef Nti will be seen exploring different kinds of dishes on the streets as she takes them to her kitchen where she’ll give them a modern twist.

“I am so excited, my new show is going to show in 164 counties... so this channel is like the biggest in the world. I am also a little bit anxious because it’s a new offering. I’m hoping people will love it.”

Chef Nti explained that her new show was something the continent had been waiting for as other countries from different parts of the world have managed to document the different types of food they have.

“The difference about my show is that this is something the continent has been waiting for. If you look at any network in the world, you’ll find that there’s street food in Asia, street food anywhere. It is well but when it comes to Africa, there’s no show you can find that has street food told from our point of view," she said.

The popular chef also said she sees the platform as a means of archiving African food, adding that she hopes her show will also promote the country's culinary heritage.

“ This show is not even about me—it’s about me sharing these stories through food as a South African.”

While the show is about exploring street food in Africa, the popular chef hopes to expand into other parts of Africa in the following seasons.

“I’m archiving food from all corners of the country—from your chicken dust to your chicken feet and Durban cuisines.”

Although Covid interrupted a lot of productions globally, Street food in Africa started shooting before the worldwide pandemic hit and lockdown restrictions were implemented.

As for her favourite dishes? The chef says magwinya, atchaar and white liver, as well as tin fish with biryani style rice rate among her top three.

Street food in Africa will premiere on March 17 at 8pm on Food Network.