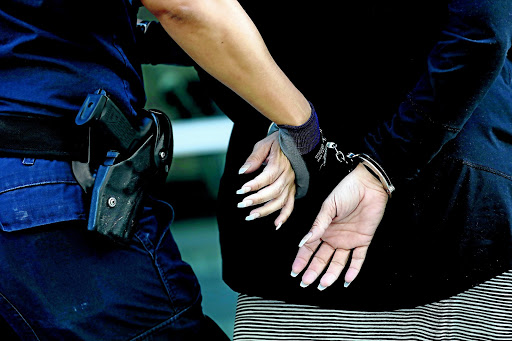 A woman is detained in the file picture by a US Customs and Border Protection officer after dagga was found in her vehicle while entering the US from Mexico. Photo: John Moore/Getty Images

More needs to be done to ensure that human traffickers are brought to justice and Rohingya migrants are protected, rights groups said on Thursday, after a trial in which 62 people were convicted of crimes including trafficking and murder.

A Bangkok court convicted the 62, including a general, police officers and provincial officials, on Wednesday at the end of Thailand's biggest ever human-trafficking trial.

The trial began in 2015 after the discovery of more than 30 bodies in shallow graves near the Malaysian border in what authorities said was a jungle camp where traffickers held migrants hostage until relatives paid ransom for their release.

The discovery led to more than 100 arrests.

Many of the dead were believed to be Rohingya, a persecuted Muslim minority from Myanmar, many of whom seek refuge in mostly Muslim Malaysia. Thailand has not released a full report on the graves or the results of forensic tests.

"The government needs to do more beyond this and continue investigations. It should leave no stone unturned."

The court took more than 12 hours to deliver the verdicts which rights groups said showed the government was serious about the problem.

The longest jail term was 94 years, for Soe Naing, widely known as Anwar, a Rohingya man who police said was a key figure behind the jungle camp where dozens died.

Thailand has long been a source, destination and transit country for men, women and children smuggled and trafficked from poorer, neighbouring countries, including Cambodia, Laos and Myanmar, to Thailand or further afield, often to work as labourers and sex workers.

Last month, the U.S. State Department left Thailand on a Tier 2 Watchlist, just above the lowest ranking of Tier 3, in its annual Trafficking in Persons Report.

The State Department said Thailand did not do enough to tackle human smuggling and trafficking, and did not convict officials "complicit in trafficking crimes".

While welcoming the outcome of the trial, rights groups said more needed to be done, both to protect the estimated 5,000 Rohingya in Thailand, and to investigate the smugglers' camps where many more victims of beatings, disease and starvation are believed to be buried.

Police, troops and security volunteers in 2015 did not search hills surrounding the mass grave site, despite evidence from rights groups and media that other graves were dotted along the border.

"We documented a massive operation that trafficked tens of thousands of Rohingya during a three-year period. The loss of life was significantly more than the focus of this trial."

Weerachon Sukondhapatipak, a government spokesman, said Thailand would press on with investigations.

"The government will use the tools at its disposal to solve the trafficking problem," Weerachon told Reuters.

Myanmar's treatment of its roughly one million Rohingya has emerged as its most contentious rights issue as it makes a transition from decades of harsh military rule.

The Rohingya are denied citizenship and classified as illegal immigrants from Bangladesh, despite claiming roots in the region that go back centuries, with communities marginalised and occasionally subjected to communal violence.

Many take smugglers' boast across the Bay of Bengal, hoping to start new lives in Southeast Asia.