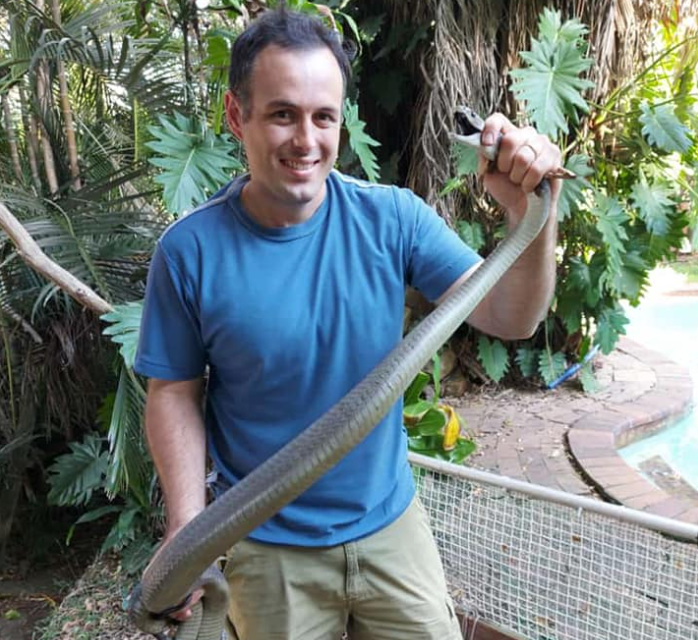 Snake rescuer Nick Evans has shared his latest catch of a black mamba that had curled up in a roof of a home in Westville, Durban.

In his latest podcast, aired on East Coast Radio, Evans said the area has a lot of black mambas due to an abundance of dassies which the snakes eat.

“This property is near a nature reserve. There are quite a few mambas there and there are dassies in the area. Mambas love young dassies, so there is food, and a roof makes for a nice shelter,” he said on his way to the property.

Evans received the call to capture the black mamba while out on call at a Queensburgh home where he caught “quite a lot” of Mozambique spitting cobras.

In the chilling audio, Evans narrated from the Westville home.

“The snake is on the wall. It has just popped its head up from there. It doesn’t look like a big mamba. Yup, I can see it looking out. It is probably terrified right now.”

After searching for a few minutes, he asked to go up to the roof because there was not enough space inside.

The search took a while and Evans had to break portions of the roof to get to the black mamba.

‘It could have ended badly’: How 2.2m black mamba was captured in teen’s bedroom

Durban based snake rescuer Nick Evans says a call made by a teenager saved the child’s life and that of a 2.2m black mamba.
News
6 months ago
Next Article