Women on medication, having counselling after sanitary towels saga 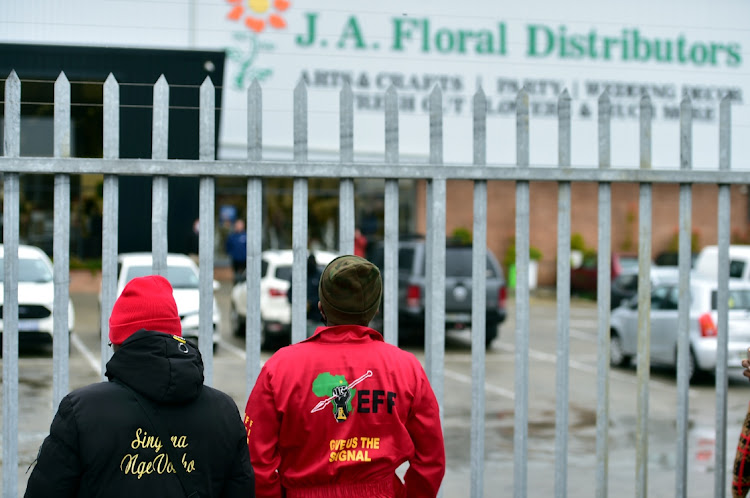 Members of the EFF went to JA Floral Distributors in Fairview as anger mounted after reports that four female employees had been subjected to a degrading underwear inspection.
Image: Eugene Coetzee

The four retail workers who had been allegedly forced to strip down to their underwear and show their sanitary towels to their manager have broken the silence for the first time and spoken of the trauma they experienced.

The women were subjected to the demeaning act of undressing and being inspected for menstrual periods a month ago by the now dismissed manager of JA Floral Distributors in Port Elizabeth, Eastern Cape, after the manager complained about frequent menstrual blood stains in the toilets.

Plaatjie, 45, says that the incident has negatively affected her relationship with her children as she sometimes takes out her anger on them because she is always emotional.

“This negatively affected my emotions and as a result I become angry towards my children without even noticing,” Plaatjie said

Plaatjie, who suffers from high blood pressure and takes medication, said the incident has also forced her to take post-traumatic stress medication as she was diagnosed with the disorder with the three other employees.

Plaatjie said that she cannot continue to see her psychologist because of the high cost, at R800 a session.

“There is no progress on my psychology sessions as I only attended one session and can longer afford to pay because I am employed on a short-time basis.”

“My eldest daughter is 28 years old, the same age as the woman who forced us to strip our underwear. My daughter cannot even take part in conversations about this issue around colleagues as she is ashamed to reveal that I, her mother, am one of the victims.”

Vinqi, 39, who has been with the company for six years, says she has not talked about the matter with her children and does not even know how to tell them.

“I have not even touched [on] the matter with my children and I want nothing more than justice to take its course as the people who are responsible are moving on like nothing happened,” said Vinqi.

Vinqi also suffers from high blood pressure and is taking medication along with the other prescribed medication.

Sompantsha, 38, says that the incident has affected her family and crushed the dignity of her family, which values tradition a lot and the post-traumatic stress medication is heavy on her as she is already on mild anxiety medication.

Meanwhile, Solomon, 25, says that the incident has affected her as the breadwinner of the family as she has to incur the costs of psychology sessions and medication on top of supporting her family financially.

The workers said that their income is R2,019 per two weeks since they are employed on a short-term basis and it is not enough to cover all the expenses.

“I am always in bed and I am also taking hormonal medication to raise my mood besides the post-traumatic medication,” said Solomon.

Sowetan contacted director of Greyvensteins Incorporated Tiaan Labuschangne, who commented on behalf of JA Floral Distributors.“Our client has, at no stage, refused to pay for doctor and psychology expenses, which in fact is one of the issues being addressed between ourselves and Karen Roberts Attorneys offices. Our client has, on numerous occasions, made it clear that it does not condone the alleged behaviour of one of its employees and regards the incident as serious of nature,” said Labuschagne.

According to a letter shared with Sowetan by the workers, JA Floral Distributors has offered to contribute towards the workers' psychology sessions.

“Our client, without admitting any liability, is willing to tender a contribution of R2,000 per worker for these sessions” said Labuschagne.

However, JA Floral Distributors expressed concern about the workers not reporting for work after the incident and not submitting sick notes.

“Some of them have no remaining sick leave," said Labuschagne. “It can also not be expected for our client to pay your clients indefinitely without them returning to work.”

The workers say that they cannot return to work as they are still recovering from the trauma of the incident.

"Some customers come and ask for the four the workers who were forced to show their underwear and even laugh about it. We are traumatised and we cannot go back as yet,” said Plaatjie.

The workers added that they submitted sick notes until their lawyer communicated with the company’s legal team telephonically that they cannot continue working as they are still reeling from the trauma of the incident.