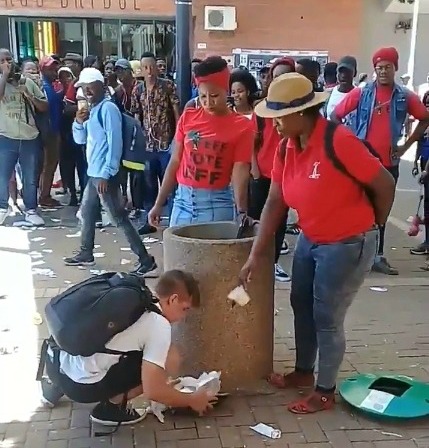 University of the Free State (UFS) student Eckhard Binding seems unfazed as he tries to dispose of rubbish, only for two women in EFF T-shirts to throw it out.
Image: Screengrab from Twitter/@nonnystoned

The EFF at the University of the Free State (UFS) has called the student who seemed unfazed as he tried to dispose of rubbish in a bin, only for two women wearing EFF T-shirts to throw it out, as a “white boy” trying to impress the “white cabal”.

“The acts of white boy that is seen in the circulating video were never as a result of being forced to pick up the dirt as some speculate, but were rather motivated by his passion to silence the voices of poor black parents trying to express their frustration,” EFF UFS student command chairperson Siphokazi Tyida and secretary Jerry Thoka said in a joint statement on Tuesday.

“What the white boy did was an attempt to normalise the state at the Thakaneng bridge and silence the protestors, deeming the black protestors as stupid and worthless to impress the white cabal that continuously engage in racist mechanism to silence black workers and students.”

The video of the incident on the university’s Bloemfontein campus, which happened on Friday, went viral on Monday.

The party did not explain why the women kept removing the rubbish on the ground or deny that they were EFF members.

The student in the video, Eckhard Binding, told TimesLIVE on Tuesday: “I wasn’t raised to remain silent. It’s my best and my worst quality.”

He added: “I was so angry and annoyed. I don’t know why, but these things affect me, so I just went and said: ‘You know what, I’m going to start cleaning up. Maybe people will join me’.”

Binding is a third-year BCom student. He was cleaning up rubbish for about 30 minutes after protesters had made their way around campus littering, breaking chairs and tipping over tables.

“There is a large part of the incident which you don’t see, because that video was taken at the very end, with the last pieces of rubbish I wanted to throw away,” said Binding.

Outsourced workers disrupted lectures on Thursday after embarking on an unprotected strike over insourcing at the university.

The EFF said its support for insourcing is “informed by the continuous inhumanity that our black parents face on a daily basis in this institution, which inhumane conditions became apparent to student as we interact with outsourced workers in the university”.

It claims the university’s “arrogance and a character of unwillingness to better working conditions of black workers” dates back to February 2016.