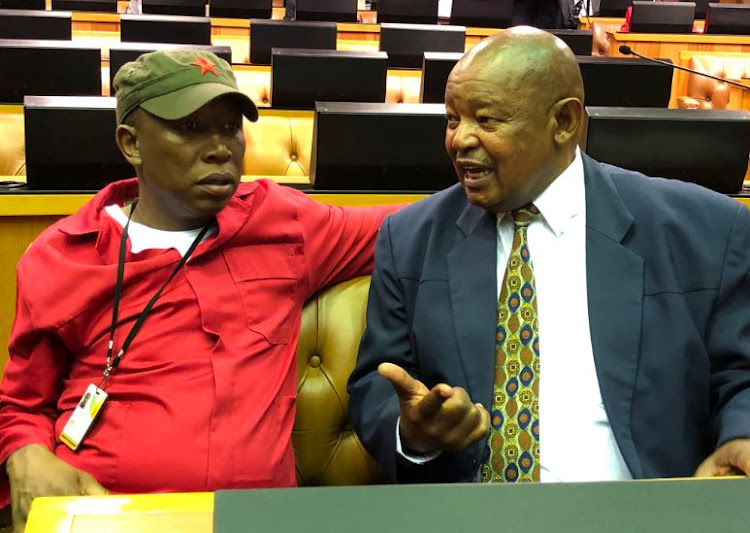 The EFF has called for a commission of inquiry into claims that President Cyril Ramaphosa collaborated with apartheid authorities in the early 1970s.

The shocking allegations were raised by Cope leader Mosiuoa Lekota during the Sona debate in parliament on Wednesday.

Although Ramaphosa received staunch backing from health minister Aaron Motsoaledi‚ the EFF still wants the allegations to be probed.

"The EFF takes seriously the allegations made by the leader of Cope‚ Mosiuoa Lekota‚ that President Ramaphosa collaborated with [the] apartheid Special Branch and sold out his comrades in order to avoid imprisonment around 1972-1974‚" said the EFF in a statement.

During the State of the Nation Address (Sona) debate on February 13 2019, Cope leader Mosiuoa Lekota told parliament that President Cyril Ramaphosa chose others over his own country. Lekota went on to say that he won’t walk away from the people of SA. He will continue the struggle with them.

The party wants Chief Justice Raymond Zondo to preside over the inquiry. EFF leader Julius Malema wrote to Ramaphosa asking him to "allow the chief justice to appoint a judicial commission of inquiry to investigate these allegations in order to clear the matter once and for all".

"Our country cannot be led by a person who collaborated with the Special Branch to condemn freedom fighters [to] imprisonment and possible loss of life."

Malema told Ramaphosa that he had spoken to Lekota after he made the allegations. "He [Lekota] further illustrated that there exists sworn statements and affidavits that confirm your collaboration with [the] apartheid Special Branch.

"There are obviously attempts from members of your political party [the ANC] to dispute the fact that you collaborated with the apartheid government to the sacrifice of freedom fighters‚" wrote Malema.

"We believe that these are serious allegations ... which should be tested through a judicial commission on inquiry."

President Cyril Ramaphosa and the Democratic Alliance will go head to head in the Constitutional Court on Thursday over whether the president must ...
News
2 years ago

DA leader Mmusi Maimane says President Cyril Ramaphosa should not absolve himself from the role he played in government under former president Jacob ...
News
2 years ago

DA MP Geordin Hill-Lewis claims that ANC leaders profited from destroying Eskom and should therefore not be surprised by load-shedding.
News
2 years ago
Next Article