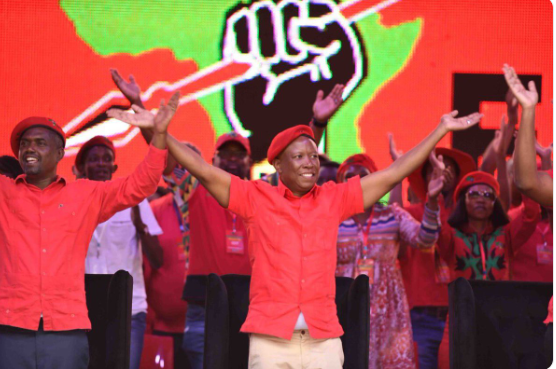 Under an EFF government, 50% of the land would be owned by the youth and women while at least half of the country’s mineral resources would benefit locals.

This is if the EFF manifesto for the upcoming general elections, unveiled by party leader Julius Malema in Soshanguve north of Pretoria on Saturday, with a particular focus on land reform and job creation, is anything to go by.

According to the EFF manifesto, themed "our land and jobs now", a "massive and protected sustainable industrial development" would be rolled out for the next five years to end the misery of the nine million unemployed South Africans should the EFF win the elections.

The EFF launched its election manifesto at Giants stadium in Soshanguve on February 2 2018. This is what EFF leader Julius Malema promised to deliver to South Africans.

This is while all land in the republic would be in the custodianship of the state and a land ombudsman would be established to protect the rights of people to land and abuse from state officials and private companies.

As for those paying rent on residential land, they would be history when the red berets had state power since "the EFF government will abolish rentals in all residential land".

Most of the land would be owned by black people, according to the EFF's "demographically representative" land ownership policy and manifesto promise, while any ownership of land by foreign nationals would be abolished.

"The EFF government will distribute a minimum of 50% of land to be controlled by women and the youth and women will get tribal land, married or not.

"The EFF will establish a people's land council to manage and redistribute land to all those who need it for residential and productive purposes."

On jobs and the economy, the EFF manifesto promises the establishment of 37 "economic zones" in all provinces across the country. Companies who invest in these economic zones "will be exempted from paying tax" provided they commit to creating at least 2,000 jobs.

The EFF is launching its election manifesto at the Giant Stadium in Soshanguve on Saturday.
News
3 years ago

"The EFF government will amend the PMFA and MFMA to compel national government, provincial and state-owned entities to procure 80% of all goods from local producers and 50% from producers of which 50% is owned and controlled by women and youth," reads the manifesto.

The businesses will not be allowed to sell whatever they so please, says the EFF, because "the EFF government will impose a quota of 60% on all shops to sell locally produced goods and products".

The EFF also promised to clamp down on corruption by introducing legislation that imposes a minimum of a 20 years’ prison sentence on those who steal from the public purse.

"Anyone who steals from government, that person is stealing from the poor. We will start with Jacob Zuma to set an example and we will follow with Gwede Mantashe, then Nomvula Mokonyane and all of them one by one. They are all going to jail, including Cyril Ramaphosa who got R500,000 from Bosasa and that fat cat called Angelo Agrizzi," said Malema.

On social services, Malema told the crowd at Giant Stadium that under an EFF government education would be free and compulsory and all would be forcefully taken to school until the level of an undergraduate qualification.

"You can insult us when we forcefully take you to school but you will thank us when you graduate," said Malema.

Floyd Shivambu is adamant that the red berets will remove the DA from power in Tshwane.
News
3 years ago

He added that they would build early childhood development centres and schools in all wards across the country, with a paperless policy as technology would be the order of the day.

Malema also highlighted the collapse of public healthcare in the country, saying the situation was so bad "going to a public health facility was equal to going to a mortuary".

Malema said they would build specialised hospitals for conditions such as tuberculosis, cancer and sugar diabetes.

According to the EFF leader, the construction of proper houses would also guarantee clean water, electricity and proper sanitation.

While the EFF would increase social grants, Malema added that recipients would also get state-sponsored free electricity.

With regards to banks, the EFF would outlaw the repossession of mortgaged houses by banks from people who have paid at least half the bond and cannot continue "due to socioeconomic circumstances".

The EFF would also establish a "sovereign wealth fund" identical to that which Libya had under the late dictator Muammar Gaddafi, said Malema.