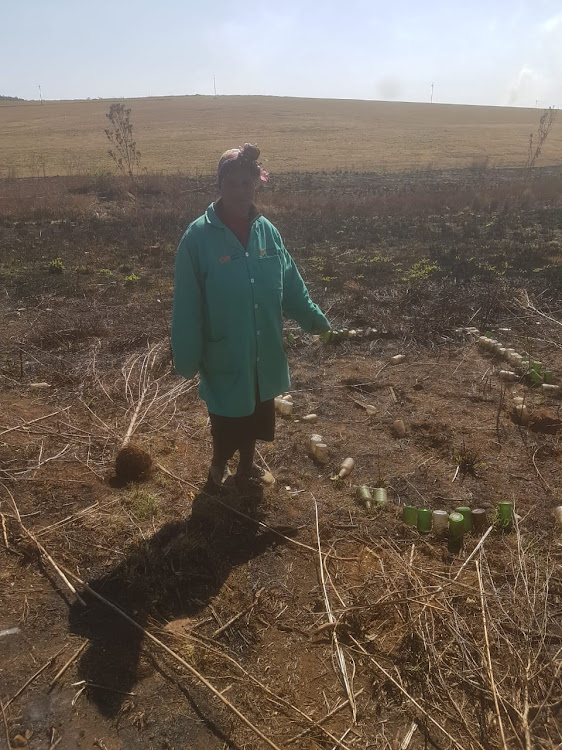 Community representative Fikile Maharaj pointing one of the still visible graves after their ancestral graves were demolished by the farmer.
Image: Bongani Mthethwa

A local chief has appealed to furious community members for calm after they torched a farm in Kranskop in the KwaZulu-Natal midlands after the farmer dug up grave sites to plant mealies.

Tensions erupted at the Aussicht Farm on Monday night when the community found out that the farmer had graded the cemetery. Protesters reacted to the news by setting crops alight‚ ransacking the farm and blockading the road.

Police were called out to the area on Tuesday morning to diffuse tensions.

Community members in Kranskop in KwaZulu-Natal where tensions flared and crops were set alight on a farm on Monday night. 📹@Khungwayo @TimesLIVE pic.twitter.com/t2H3NWgyfa

"It has been agreed that a meeting will be convened on August 15 to find a solution. The KZN agriculture MEC‚ Themba Mthembu‚ and representatives from rural development and land reform will be invited to take part in the meeting.

"I think on that day we will find a solution and get the land we want. But if there is no solution you must continue what you are doing."

He said Gathmann has opened another chapter in the land expropriation debate.

"Our ancestors won't forsake us because we are doing what we are supposed to do‚" Sithole told the community.

Sithole did not reveal what the farmer had told him‚ adding that August 15 will be "D-Day" for the farmer as they want to take the keys to the land back.

Gathmann said he would issue a statement at a later stage.