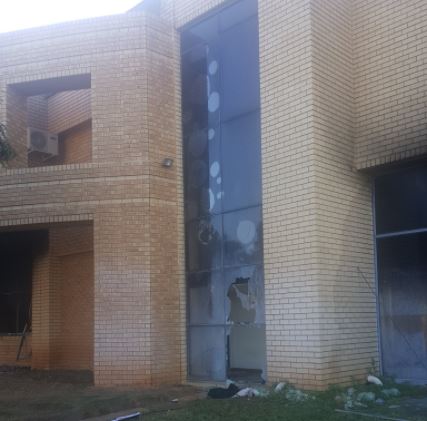 A cultural centre in Mahikeng has burned down amid violent protests targeting Premier Supra Mahumapelo.

#Mahikeng A fire is blazing thousands of rands of computers and sound equipment. The devestation is extraordinary. pic.twitter.com/eFP8UOKHli

The devestation can't be quantified just yet. #Mahikeng pic.twitter.com/xUYfvO91R4

#Mahikeng This is the scene at the Mmbana cultural centre. An NPO founded by government that is a hub for arts and culture in the province. Fires are still burning. There are so many helpless faces. pic.twitter.com/vProMNiS9p

One man died in the North West capital on Thursday evening during a car chase between police and protesters.

President Cyril Ramaphosa is due to visit the area on Friday. Ramaphosa on Thursday called for calm after two days of protests.

In a statement by his spokesperson Khusela Diko‚ Ramaphosa announced that he would be cutting short his trip to the United Kingdom.

“President Ramaphosa has called for calm and adherence to the rule of law in the province and has called on all aggrieved parties to express their grievances through peaceful means and engagement‚ rather than violence and anarchy‚” said Diko.

Mahumapelo has faced a revolt after it emerged that state company Denel issued a bursary of around R1 million to his son. Mahumapelo on Thursday called for an end to the mass disruptions in the province.

“We call on the protesters to refrain from the violent disruptions and approach government for discussions on any issues which they would like to discuss‚” said Mahumapelo’s spokesperson Brian Setswambung.

Stateng residents looting a warehouse in Mahikeng as protests calling for premier Supra Mahumapelo to step down intensify. pic.twitter.com/k06YrkV2II

One man has died in Mahikeng‚ the North West capital which has been rocked by violent protests against premier Supra Mahumapelo.
News
4 years ago

Seven more people have been arrested for public violence in Mahikeng‚ bringing the total to 16.
News
4 years ago

Cyril Ramaphosa and ANC heavyweights planned to visit the North West on Friday.
News
4 years ago
Next Article