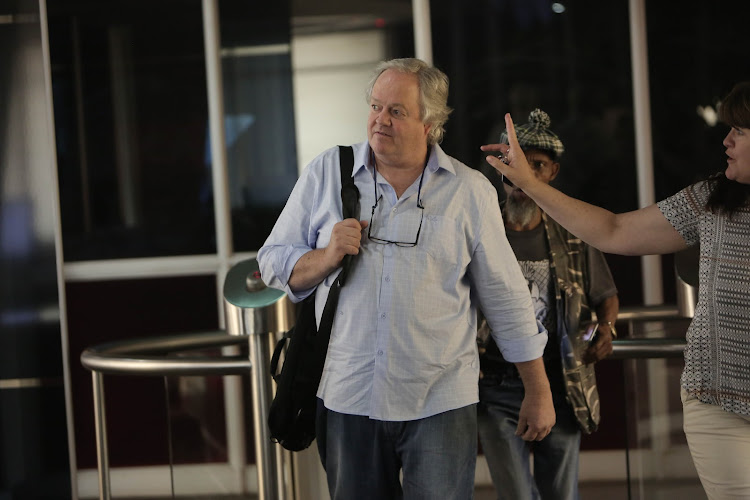 Veteran journalist and author Jacques Pauw says his life has been threatened since the release of his controversial book “The President's Keepers”.
Image: ALAISTER RUSSELL

“If you don’t stop writing about Jacob Zuma‚ you are going to be dead.”

That is the message investigative journalist and author of The President’s Keepers‚ Jacques Pauw‚ says he received from an anonymous caller on Monday evening.

“I received a call from a private number while I was speaking to Ronnie Kasrils about his book. The person said: ‘I you don’t stop writing about Jacob Zuma‚ you are going to be dead’‚” Pauw told SABC 2’s Morning Live viewers on Tuesday.

Pauw said the threat was the third he has received since his book was published‚ but that he was not “overly” concerned about them.

“I suppose it comes with a book like this. There are a lot of unhappy people out there. If someone threatens you‚ they are not going to do it.”

He said his book‚ which exposes Zuma’s alleged corrupt activities‚ shows how the country is becoming a gangster state.

“We see it every day. We see the rise in crime. We are at the verge of becoming a gangster state‚” Pauw said.

Despite the death threats and a demand from the State Security Agency for Pauw to desist from distributing the book‚ he is not backing down.

“I knew the book would cause a lot of discomfort in government and law-enforcement agencies. I knew there was a going to be a legal challenge to the book‚” Pauw admitted.

He said he was not surprised when the SSA wrote the letter demanding that he and NB Publishers remove the book within five days‚ a deadline that expired on Monday.

“It’s too late to go to court after so many copies have been distributed. Instead of removing the book‚ we are printing more.”

He called on South Africans to speak out and act against corruption.

“We cannot sit back and feel there is nothing we can do. We have to protest and let the government know how we feel.”