Mom and daughters burn to death after suspected attack by soldier 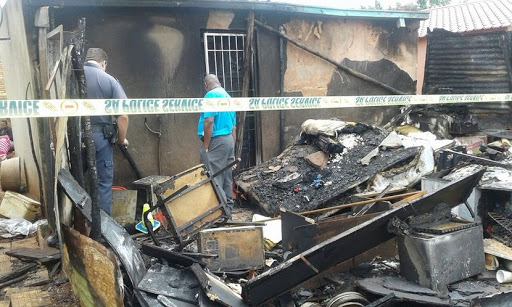 A mother and her two daughters have burnt to death in a fire Credit: Supplied by SAPS

A mother and her two daughters have burnt to death in a fire‚ suspected to have been started by her boyfriend‚ who is a member of the SA National Defence Force (SANDF).

“The male friend was allegedly spotted driving into the alleged girlfriend’s house in an SANDF minibus a few minutes before the house caught alight‚” Hlathi said in a statement.

“When the fire broke out and members of the community were trying to extinguish it‚ the male friend was spotted hitch hiking back to the army base … in Middelburg.”

Police investigations have revealed that the soldier allegedly bought 50 litres of petrol‚ prior to the attack. The petrol was poured into two 25 litre containers. One of the empty petrol containers was found in the partially burnt minibus‚ which was left on the property.

Meanwhile‚ the soldier himself had sustained injuries in the blaze.

“It is alleged that the man arrived at his workplace guardroom and informed the guards [that he] sustained the injuries while trying to assist his girlfriend who had been struck by lightning‚” Hlathi said.

He suffered 48% burn wounds to his arms and hands.

The 48-year-old man was admitted to the MidMed Hospital under police guard.

The children‚ aged 17 and 10‚ were declared dead at the scene‚ while their 39-year-old mother died in hospital several hours later.