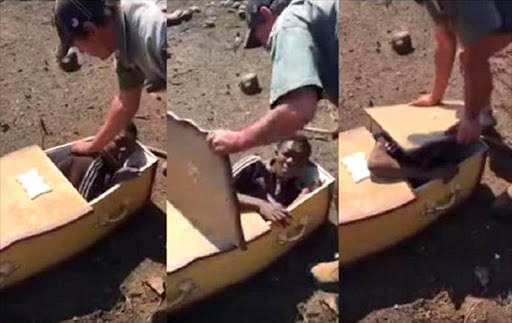 Victor Mlotshwa is forced into a coffin

A man who claims to have been the second victim of assault by the two men accused of assaulting a farm worker and placed him in a coffin‚ told the court he had witnessed part of the attack.

Delton Sithole told the High Court sitting at the Middelburg Magistrate’s court that he was assaulted by Willem Oosthuizen and Theo Jackson‚ the men who also assaulted Victor Mlotshwa and put him in a coffin last year.

He said he was assaulted because he was “trespassing” on a farm.

He said he sustained injuries to his head and tongue and that his whole body was sore.

He also told the court that the men called him the k-word several times.

He said while he was being assaulted‚ he overheard the men say there was “another ka***r on the farm“.

The men‚ according to Sithole‚ chased the man until they apprehended him and took him to where they had assaulted him.

He identified the man as Mlotshwa.

He said he did not witness their entire attack on Mlotshwa‚ but had seen Oosthuizen and Jackson assault him.

“I went to the community and told them that the whites had kidnapped me and were assaulting another black man‚” he said.

He said Mlotshwa later returned to the community and told them that he had been put in a box.

“He didn’t say that he had been put in a coffin. He said it was a box.”

Oosthuizen and Jackson face charges of attempted murder‚ two counts of assault with intent to cause grievous bodily harm‚ kidnapping‚ intimidation‚ unlawful possession of a firearm and defeating the ends of justice.

The men have both pleaded not guilty on all charges.

De Beer said Jackson had been working on the farm for 10 years when the incident occurred.

The incident was captured on a cellphone. The video went viral‚ causing widespread outrage. The video was admitted as evidence by the court during the bail application of the two.

The duo is also accused of concealing evidence by allegedly burning the coffin in October.