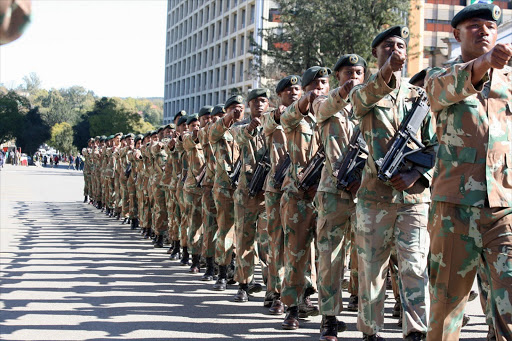 SANDF army parading in the streets of Mthatha after the 14 South African Infantry Batalion was bestowed the Freedom of Mthatha by the King Sabata Dalindyebo Municipality on Saturday. Picture Credit: LULAMILE FENI

A Pretoria magistrate has questioned the manner in which the SA National Defence Force (SANDF) handled allegations that could amount to "high treason" against a local man.

Ndaba, allegedly duped nearly 250 young people into believing they were being recruited by the army, and kept them in a house in the town.

Ndaba was applying for bail.

In a statement read out to the court by prosecutor Ronnie Sibanda, SANDF official Mekobane Benny Mashilo said the defence intelligence received information that Amabutho was going to march to the Union Buildings on November 7 2014 to hand over a memorandum demanding they be incorporated into the SANDF. Mashilo said he then started investigating the organisation and found out that Amabutho recruited members from as far as Namibia, and offered military training at three properties in Pretoria.

When police arrested Ndaba on June 27, the 237 "recruits" mostly from KZN, said they paid R300 for their registration, R1800 for training and additional R200 per month for lodging since last year.

Meanwhile, Mashilo said Amabutho's modus operandi was to march to government departments as a strategy to mislead members about integration. He said Ndaba used the old SADF emblem to create an impression that he had a connection with the SANDF.

But magistrate Pierre Wessels questioned why additional charges were not added to fraud, kidnapping and crimen injuria charges Ndaba faced .

"Allegations that the SANDF knew [about Amabutho] long before this incident, did they ever do anything? These are very serious allegations. This sounds like high treason," Wessels said.