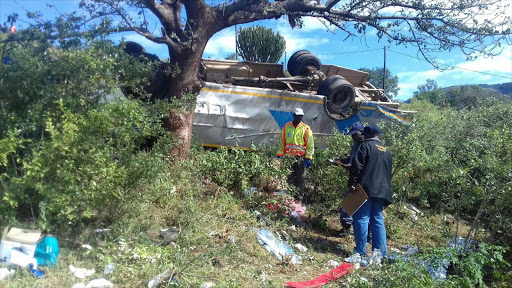 Fourteen people died when a bus overturned in KZN on Saturday PICTURE: SUPPLIED

The possibility of overloading and an inexperienced driver will form part of the investigation into a horror bus crash that claimed the lives of 14 people at Ntunjambili in KwaZulu-Natal on Saturday‚ KZN MEC for transport Mxolisi Kaunda says.

Dramatic information that emerged on Saturday evening indicated that the official driver had handed the reins over to his ‘friend’.

This is among the details issued in a shocking text message from the province’s Road Traffic Inspectorate (RTI)‚ sent out by KZN Emergency Medical Services spokesman Robert McKenzie.

The RTI text message read: “Further update from scene @ Ntunjambili. Death toll has risen to 14 (all females). Driver did not have a valid professional driving permit... it is unknown whether he has a drivers license or not reason being he failed to produce it  during the time of an accident.

“The original driver was a passenger in a bus‚ he allowed his friend to drive the bus on his behalf.”

The bus overturned near Ntunjambili‚ in central KZN‚ shortly before 11am on Saturday morning. Twelve people were reported dead on the scene‚ with two later dying in hospital. The victims were all female.

Kaunda said the bus was ferrying people from Bulwer in Dr Nkosazana Dlamini-Zuma Local Municipality to eNkandla for a traditional wedding.

According to reports on the scene‚ the driver lost control‚ and the bus rolled several times. The patients were trapped in the bus for several hours before being extricated

Kaunda said on Sunday after a visit to the accident scene on Saturday night: “A multi-disciplinary team from SAPS collision unit‚ the Road Traffic Inspectorate and Public Transport Enforcement Services from the Department of Transport will continue with their thorough investigation.

“More work including the reconstruction of the scene‚ thorough mechanical assessment and general condition of the bus will unfold over the next days. Looking at the possibility of overloading and inexperienced driver will also form part of the investigation.”

area‚ he had  assigned a team of engineers to conduct a thorough investigation and assessment on how to improve safety on this particular road.

“The topography in the area is very steep. However‚ a team has been assigned to urgently start conducting an inspection and advise on safety measures needed to save the lives of the people using this road.

“This will involve exploring possibilities of adding speed calming measures‚ more visible signage and retainer walls in some parts of the road. We also appeal to motorists to adhere to road rules and observe signs‚ because it is clearly marked that the speed limit cannot exceed 40 on this part of the road‚” Kaunda added.