‘I don’t wish that on any human being’: tearful Barry Steenkamp on Reeva’s murder 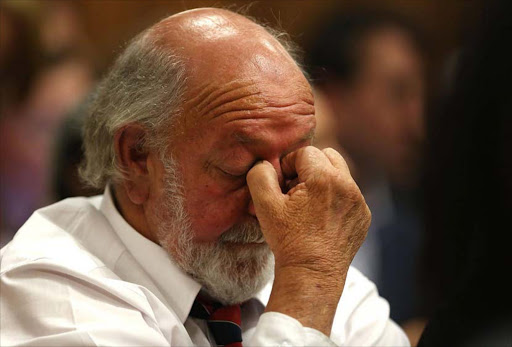 A frail Barry Steenkamp‚ 73‚ on Tuesday relived the traumatic aftermath of the murder of his daughter Reeva – a qualified lawyer and model who was gunned down by her boyfriend‚ former world acclaimed athlete Oscar Pistorius.

“From that day‚ it’s affected June‚ myself and my family so much‚” he said in Pistorius’s sentencing hearing.

Also read: Uncle Arnold has a job for Oscar that will help others

Steenkamp had a stroke after the murder and has remained in ill-health.

“I don’t wish that on any human being‚ finding out what happened‚ it has devastated us.”

Pistorius served just a year of a five-year prison term for the killing of his girlfriend Reeva in 2013.

Judge Thokozile Masipa is resentencing Pistorius in the Pretoria High Court for the second time this week after the Supreme Court of Appeal set aside the culpable homicide conviction and replaced it with that of murder last year.

Barry Steenkamp has not been able to attend the trial until now.