Mbeki supports ANC veterans' call for Zuma to step down 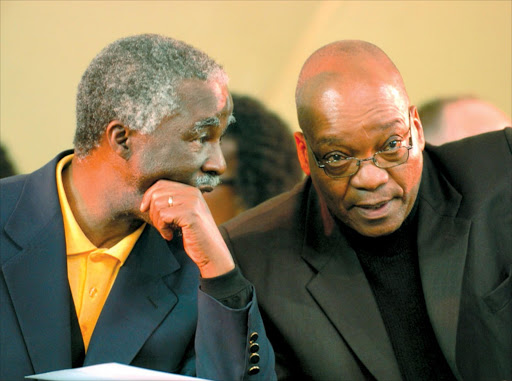 This emerged when he defended the ANC veterans yesterday.

Responding to a question about his views on the veterans call that Zuma should resign, Mbeki said the veterans' voices were critical in finding lasting solutions to the problems the country was facing.

He said the only way the country would find solutions to its many problems was if South Africans came together and addressed them frankly.

"If that means removing Max Boqwana from his position as CEO of the foundation, let that be one of the outcomes," Mbeki said.

"If we don't get together in that national dialogue, look honestly at everything, we will not be able to solve any of our problems," Mbeki said.

According to him, the damning constitutional ruling which ordered Zuma to implement [public protector Thuli] Madonsela's remedial action also exemplified the many problems.

"Even the fact that the constitutional court had to read out a lesson to the nation about what is meant by a constitutional democracy, it illustrates something that is wrong," Mbeki said.

According to Boqwana, the Thabo Mbeki Foundation and nine other foundations, including the Ahmed Kathrada, OR Tambo and Helen Suzman foundations were organising national dialogues to discuss the multitude of problems the country is facing.

Boqwana said there was growing disillusionment within the country's youth towards the constitution, with some painting it as a sell-out document which did not address the material problems of the majority.

In an apparent reference to the current ANC squabbles around Zuma's fate as president, Mbeki said he had not wanted to get involved in the current struggles which were around particular issues.

"This is because there is this bigger issue, which is the future of the country, and not the future of particular individuals," Mbeki said.

This was not the first time Mbeki spoke on the Nkandla court judgement.

Earlier this month, he reiterated the court's determination that failure to fulfil SA's constitutional obligations "might threaten the very 'survival of our democracy', and therefore constitute a counter-revolutionary act, where the revolution is understood as the establishment of our Constitutional Democracy".

Mbeki also felt vindicated by the report of the Seriti Commission of Inquiry, which found no wrongdoing in the controversial multi-billion arms deal.

"The people who made the allegations are unable to produce one single fact to substantiate their allegations," he said.