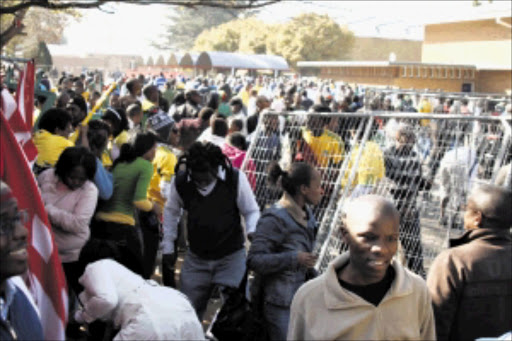 CURIOUS MASS: A large number of soccer fans crowded into the Vaal University of Technology to view the Fifa World Cup trophy when it arrived in the area yesterday. Five people were injured as the crowd jostled to see the prized object. Pic: LEN KUMALO. 03/06/2010. © Sowetan.

FIVE people were injured yesterday when they scrambled to see the Fifa World Cup trophy at the Vaal University in Vanderbijlpark.

Thousands of people turned up to see the trophy, but were disappointed when it had to be airlifted to Krugersdorp before they could see it.

Police had their hands full trying to calm down the anxious spectators.

When they were told the trophy had already been airlifted to Krugersdorp, they became angry and stormed into the building.

The original Fifa trophy is touring the country before the event starts next Friday. Today, it will be in Dlamini, Soweto.

Five people were taken to hospital after being injured during the stampede.

Elsie Mphoso and Belinda Mphaphuli arrived at the university at about 7am and two hours later were taken by an ambulance to hospital after they were injured on the legs during the stampede.

"I left my home thinking that I was going to see the trophy for the first time. But I am disappointed that I have to go home injured," said Mphoso.

Mpho Matlaletse said: "We were told that we were going to see the trophy at the Isak Steyl stadium, but the venue was changed at the 11th hour."

"The crowd was very difficult to control," he said.

"But the incident showed the excitement people have for the tournament. We also feel pity for those who did not see the trophy but due to the time allocated it was not possible for everyone to see the trophy."

The Switzerland and Ivory Coast teams are expected to arrive in the Vaal next week.