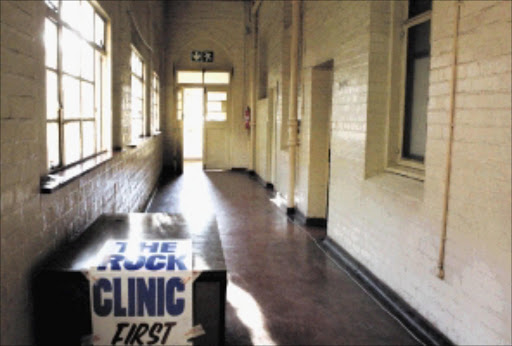 DEATH CLINIC: The Rock clinic in downtown Johannesburg, where a teenager claims her pregnancy was ended. Pic. Mohau Mofokeng. 06/12/2009. © Sowetan.

A Johannesburg clinic owner has been arrested after an abortion was allegedly performed on a teenager without her consent.

A Johannesburg clinic owner has been arrested after an abortion was allegedly performed on a teenager without her consent.

Meriam Serefi, who runs The Rock Health Clinic, is in custody charged with the illegal termination of a pregnancy after a 17-year-old girl told the police that staff at the clinic aborted her five-month-old foetus.

She told police that her boyfriend, who is a police constable at the Wedela police station near Carletonville, took her to the clinic under false pretences. He allegedly made her believe she was going for a sonar.

"It looks as if the boyfriend made prior arrangements with the clinic to perform the abortion," the teenager's distraught mother said. "On arrival my daughter was given abortion medicine.

"The nurses only told her about the abortion when she complained of labour pains. We then decided to open a case."

The mother claims the boyfriend had offered to compensate her family for the trauma the girl had suffered.

"The part that hurt me most was when my daughter told the police that the nurses assaulted her because she refused to have her child killed. One of the nurses inserted a hand inside her and pulled the foetus out," she said.

On Friday three nurses at the clinic were arrested.

Anna Chakela, Ntshidisi Sedikane and Pona Mathibe spent the weekend in jail on a murder charge.

Serefi was only handed over to police by her lawyer, Given Mulaudzi, yesterday.

The murder charges against the nurses were withdrawn. Serefi is being held on illegal termination of pregnancy charges.

Speaking to Sowetan, Mulaudzi, who will today bring a formal bail application on behalf of Serefi, said: "My client was in Roodepoort when this abortion was done. I don't understand why she is taking the flack on behalf of other people."

Investigating officer Inspector Mamabolo said: "The girl's boyfriend was also supposed to be arrested. I will wait for the court's decision on whether or not to arrest him or to urn him into a state witness."

He urged anyone with information about similar operations to contact him on 073-716-2135.