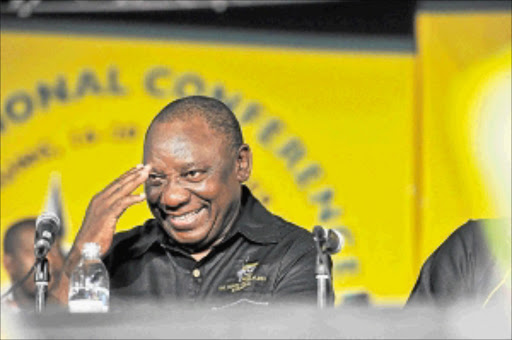 Ramaphosa, who has been a full-time businessman, was elected deputy president of the ANC in December and soon after he announced that he was going to review his business commitments.

Recently President Jacob Zuma was asked if Ramaphosa will be in the ANC full time, and he said it would depend on the workload and that he would also be key in fixing things that were wrong in the ruling party.

"I have advised Lonmin Plc and Mondi Group that I will not seek re-election to their respective boards at the companies' forthcoming annual general meetings.

"The review of existing positions, responsibilities and obligations is necessary to address any potential conflicts of interest, and to ensure that I can adequately perform the responsibilities of my new position," Ramaphosa said in a statement yesterday.

Lonmin on its website said that Ramaphosa has informed the board of Lonmin Plc that he would not be standing for re-election as a non-executive director at the company's forthcoming annual general meeting next week.

Ramaphosa came under fire last August after police killed 34 mineworkers at Lonmin following a strike. In his communication with Lomnin chief commercial officer Albert Jamieson, Ramaphosa referred to events in Marikana as "criminal" and suggested a need for "concomitant action". He has since offered to testify at the commission to explain his participation at the time.

Lonmin's chairman, Roger Phillimore, yesterday thanked Ramaphosa for his commitment to the company over a demanding period.

Ramaphosa was also a joint chairman of Mondi Limited and Mondi plc, and has decided that he will step down at the conclusion of the annual general meeting on May 3.

Joint chairman David Williams said: "We would like to thank Cyril for his significant contribution to the Mondi Group. He has helped guide Mondi through its initial years of listing and played an important role in providing constructive counsel, particularly on issues specific to the South African business environment."

Ramaphosa said the review which requires consultation with affected companies was ongoing.