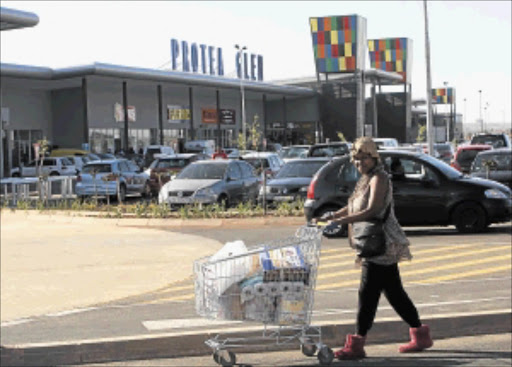 GROWTH: The new Protea Glen shopping centre in Soweto is the sixth major mall in the area and has rival retailers Pick n Pay and Shoprite under one roof. PHOTO: ANTONIO MUCHAVE

STAKES in the battle between shopping malls for the Soweto rand were raised following the recent launch of Protea Glen Mall.

The Protea Glen Mall climbs into the ring to battle it out with five other malls, namely Jabulani, Bara, Dobsonville, Maponya and Protea Gardens, for the township rand.

The Protea Glen Mall opened for business last Thursday, just in time to make a killing during the lucrative festive season, generally known for its high consumer demand.

This is the first mall to be built at Protea Glen, which was established 22 years ago. Since some of the households at Protea Glen extension one and two have finished paying off their 20-year mortgage loans, it is expected that there will be enough rands in the township to keep the mall going.

Protea Glen Mall, owned by the Masingita Group which also runs Jabulani Mall, is the first to have two JSE-listed grocery retailers - Pick n Pay and Shoprite - operating under one roof.

It also becomes the first to have drive-by fast food outlets - McDonalds and KFC.

When Sowetanpaid the malls a visit, there were 11 vacant shops at Maponya Mall, six at Protea Gardens and two at Jabulani.

Dr Thami Mazwai, the director of the University of Johannesburg's Centre for Small Business Development, said the success of each mall would be measured by the number of stores that managed to stay open over a long period of time.

"The sustainability of each mall will be determined by the degree in which individual shops in those malls will make ends meet," he said.

"If some of the shops start closing down, it will mean the buying power of the consumers where those malls operate will not be sustainable," he said.

Mazwai said some people preferred to buy groceries and clothes close to where they worked and the litmus test for the township malls would be whether there would be a mind-set shift of where consumers bought.

He said research that was done four years ago showed that Soweto had an annual buying power of R13-billion .

Sowetan spoke to some of the informal traders on how the malls were impacting their enterprises.

Spaza shop owner Maria Simelane said her business in Protea South was not affected by operating near Protea Gardens Mall because her micro-enterprise focused largely on selling small items.

"My business is not affected because I sell chips, cigarettes, sweets and cold drinks," Simelane said.

Entrepreneur Joyne Goneo, who runs a spaza shop near Maponya Mall, said consumer demand was less during the day because people preferred to buy at the mall.

" I only make money in the evenings when most of the stores in the mall are closed," said Goneo, whose store is based in Pimville.

Consumer Tshepo Mncube said it was a good thing to have Pick n Pay and Shoprite in one mall because both stores introduced competitive prices.