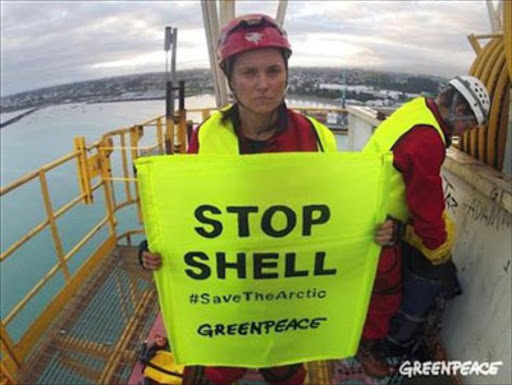 Dozens of Greenpeace activists blocked access to Shell headquarters in The Hague to protest against the Anglo-Dutch oil giant's plans to drill in the Arctic, sources said.

The environmental group said there were 70 activists at the protest but local police spokesman Cor Spruit put the number at 30.

"We showed up in a group of 70 around 7 o'clock this morning and we blocked all entrances to stop employees from getting to their offices and continuing work on the Arctic drilling," Greenpeace spokeswoman Ilse van der Poel told AFP.

The protest comes after Greenpeace launched a Save The Arctic campaign last month to preserve the land mass from oil exploration and industrial fishing.

In May, the group's activists temporarily halted several icebreakers headed for the Arctic in a bid to block Shell's plans to drill for oil in the region.

At the Friday protest nine activists tried to dismantle the Shell logo on the front of the building and replace it with one of a polar bear, according to van der Poel.

She added that Greenpeace director Sylvia Borren went to occupy the office of Shell CEO Peter Voser in the protest, which voluntarily came to an end at 0630 GMT (8:30 am).

Last month the environmental group called for more use of renewable energy and greener cars in what it said would help protect the Arctic and other areas from being spoiled by oil drilling.

"There would be no need to exploit the Arctic and other marginal sources of oil, such as the tar sands in Canada and offshore oil in Brazil, if more renewable energy powered our vehicles and if much stronger efficiency standards for cars were adopted in Europe and elsewhere," the group said in a statement.