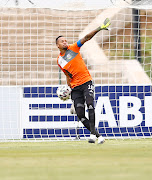 Kerr revealed Mhlongo's career was as good as over when TTM were crowned the Nedbank Cup champions after beating Chippa United 1-0 in Bloemfontein at the weekend.

Mhlongo partially lost his eyesight after he was hit by a soccer ball during a training session last month, and the club took him to an eye specialist who confirmed that his left eye was now functionally blind.

“The coach may have announced early, but he is still going to see another eye specialist. He believes he can still play football again,” a source said.

Asked for a comment, the 30-year-old goalkeeper said he would only comment once TTM pronounce on his situation officially.

But a letter seen by Sowetan confirmed the severity of Mhlongo’s eye injury, unequivocally saying “his left eye is functionally blind and surgery will not restore his sight".

Kerr insisted he spoke to Mhlongo about the possibility of not playing again, and after seeing the letter from the doctors, that’s where it was clear that he may have to retire.

“As far as I know from his conversation with me and the speech he made before the game on Saturday, he is not going to play professional football again,” Kerr told Sowetan yesterday.

“He has seen two eye specialists, and as far as I’m aware, the injury is bad, and I think he has 10% vision in his [injured] eye now.

“He may not play professional football, maybe amateur. It is sad for him because the competition between him and Washington Arubi was phenomenal. I have seen the report, and I think he may go for the second or third opinion.”

Kerr added that the club would support him through this period, and if he decides to go for another opinion, they will help him. “It is a shame because you don’t want to see players end their careers through injuries,” Kerr said.