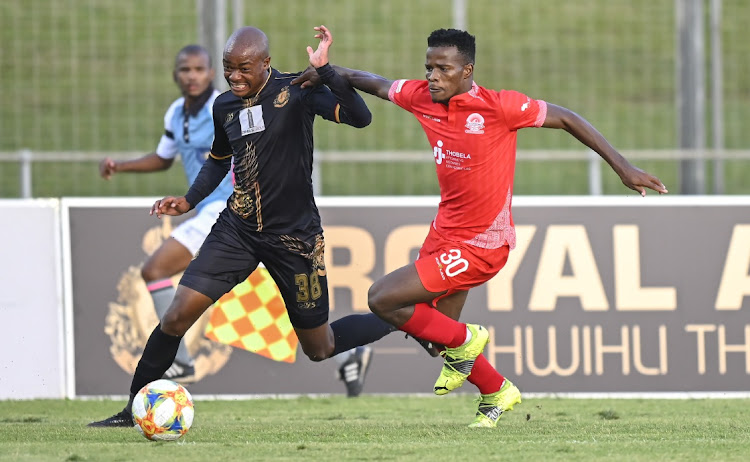 Sbonele Ngubane of TS Sporting FC challenges Levy Masiane of Royal AM FC during the GladAfrica Championship 2020/21 game between Royal AM and TS Sporting at Chatsworth Stadium on 8 May 2021.
Image: Gerhard Duraan/BackpagePix

With wheels falling off for Richards Bay, who looked certain to clinch automatic promotion until losing their last two games, Royal AM are now hot favourites to gain direct ascendancy into the Premiership.

At the weekend, Durban-based Royal dislodged fellow KZN club Bay from the summit of the GladAfrica Championship log, thanks to their 2-1 win over fellow promotion hopefuls TS Sporting, while Bay lost to JDR Stars. JDR are also promotion hopefuls as they are only four points behind log-leaders, with just two rounds of fixtures to go before the National First Division wraps up its season.

Royal with 47 points, just two points ahead of Bay at the top, will face AmaTuks and relegation-threatened Cape Town All Stars in their last two games.

Bay are showing signs of burning out, having lost their last two outing to direct rivals Sporting and JDR. At the rate Bay are dropping points, they could find it difficult to even secure a play-offs berth. They face Jomo Cosmos (away) and Steenberg (home) in their closing two games.

Third-placed Sekhukhune, now with 44 points, had led the pack for the better part of the campaign until they regressed last month. In recent weeks, Babina Noko have looked reinvigorated and they could give Royal a run for their money in the promotion run-in. Polokwane City (home) and JDR (away) are Sekhukhune’s last two opponents.

If Sekhukhune fail to eventually topple Royal, they should at least secure a berth in the play-offs. With Polokwane having nothing to play for as they’re safe from relegation and not in the promotion race, it should not be hard for Sekhukhune to dispatch them.

However, JDR could be a tough nut to crack for Sekhukhune as they also fancy their promotion chances.

Ambitious GladAfrica Championship side Sekhukhune United have roped in veteran administrator Peter Koutroulis as their football manager.
Sport
1 year ago

Siphelele Ntshangase’s agent‚ Jazzman Mahlakgane‚ says there is interest from clubs in signing the talented playmaker, who was released by Kaizer ...
Sport
1 year ago
Next Article