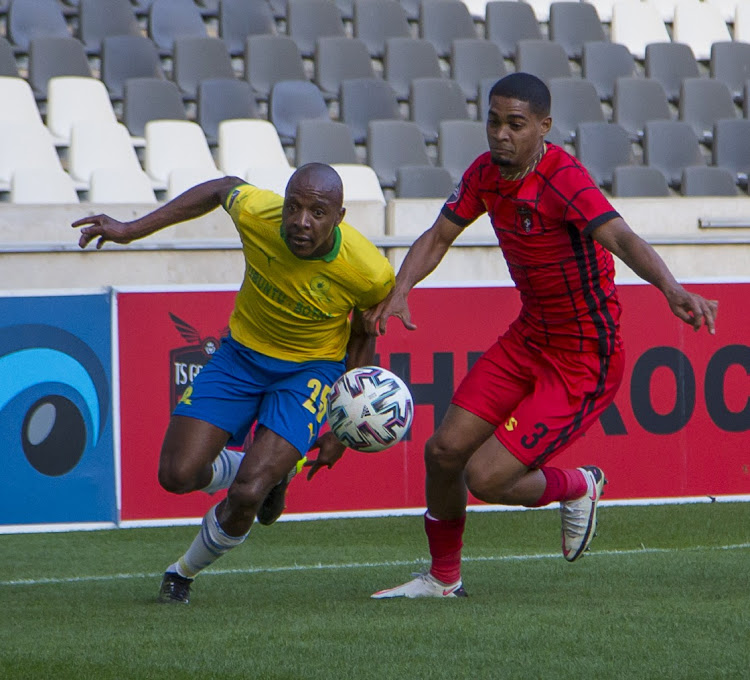 Ahead of their two-legged CAF Champions League quarterfinal against Egyptian giants Al Ahly, Mamelodi Sundowns co-coach Manqoba Mngqithi has sounded relieved that the Brazilians’ domestic league fixture backlog is now a thing of the past.

Sundowns’ 1-0 win over TS Galaxy on Sunday was their 26th DStv Premiership game, meaning they’ve now played equal number of games with almost everyone in the league. Peter Shalulile scored the goal that proved the difference at Mbombela Stadium.

“It was always important for us to fight to win these catch-up matches because we could see the pressure was mounting and there are some important matches that are coming in the Champions League,’’ said Mngqithi.

“So, it’ very important that during the stress of the Champions League, at least we’re almost there in terms of getting the number of points that we’re looking for in the league.’’

Downs’ first leg against Al Ahly is billed for Cairo on Saturday, before hosting the Egyptians, who’re coached by the club’s ex-coach Pitso Mosimane, in Tshwane on May 22. The Chloorkop side expect to have their star Themba Zwane back against the Red Devils. Zwane was stretched off early in their 2-0 win over Maritzburg United last Wednesday and also missed the trip to Nelspruit at the weekend.

“It looks like he [Zwane] will be able to play the next match in Egypt and we’re hopeful that everything goes according to plan. It [his injury] never really looked serious," disclosed Mngqithi.

“We had to be a little bit precautious in making sure that we don’t aggravate it, that’s why we took him out early without even giving it a chance. It was never really a tear, but probably a strain that could have easily resulted into a tear had he continued with the match."

Downs sit comfortably top of the table with a seven-point lead, needing just two wins from their four remaining fixtures to defend their title. Even so, Mngqithi has downplayed that they can now smell what would be their fourth championship on the trot.

“Our focus is not on smelling it [the title] or getting it. Our focus is on our process. [At Galaxy] we were playing our first match of our last circle and we’re happy that we got maximum points and in the next four games we’re still expected to get probably a minimum of nine points, that would make us very happy with the circle," stated the Downs mentor.

Rampant champions Mamelodi Sundowns are cruising to an unprecedented record-breaking fourth Premiership title on the trot but coach Manqoba Mngqithi ...
Sport
5 months ago

AmaZulu have exceeded expectations in their DStv Premiership campaign this season, but they are not showing any signs of slowing down.
Sport
5 months ago