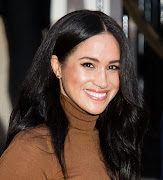 Meghan Markle, the Duchess of Sussex's name has been on the tip of most people's tongues of late following the sensational announcement that she and her husband Prince Harry "intend to step back as ‘senior’ members of the Royal Family and work to become financially independent."

While Meghan already enjoyed a level of fame long before meeting Prince Harry, it was in 2016 when rumours of a romance with the British Prince started to do the rounds that her level of fame really shot up.

Despite all the public scrutiny, which has only gained momentum since the couple's wedding, and subsequent birth of first son, Archie, the former Suits actress has somehow still managed to maintain some level of mystery.

Here are 7 things you might not known about the woman who has won Prince Harry's heart.

1. Meghan is actually her middle name

Just like her character's name in the hit show Suits, her first name is Rachel. Her full name was used by the Queen when she blessed her marriage with Prince Harry, declaring her consent "between [Her] Most Dearly Beloved Grandson Prince Henry Charles Albert of David Wales and Rachel Meghan Markle."

2. She was once the most googled actress

The talented actress started making major headlines in 2016 soon after it was revealed that she was dating Prince Harry.  The increased attention led to her beating out all the other actresses when it came to Google searches in 2016.

In 2014, Meghan started a lifestyle blog called 'The Tig', said to have been named after her favourite wine, Tignanello.  Her blog covered food, travel, fashion and beauty, while providing readers with DIY tips, recipes and motivational pieces. The blog was ultimately shut down when it became clear that Meghan was set to join the Royal family.

4. One of her best friends is a Grand Slam winner

Meghan's list of friends is not short of famous names.  One particular bestie is multiple Grand Slam winner, Serena Williams.  The pair met at a Super Bowl party in 2010, an encounter which the Duchess recounted on her blog. She wrote that: " we were both playing and chatting not about tennis or acting but about good old fashioned girly stuff."

5. She is married to her distant cousin

Just like the incestuous generation of royals before them, Meghan and her husband are technically related. The two are distant cousins, related through Meghan's father and Harry's grandmother. The families share a common ancestor, Sir Ralph Bowes, who was the High Sheriff of County Durham in England in the 15th century.

6. The lottery changed her life

When Meghan was nine years old, her father won $750 000 (about R11 million) in the lottery. According to an interview given by her brother, the money improved her family's quality of life and enabled her to attend reputable schools. She was also able to pay her way through college where she double-majored in Theatre and International Relations.

7. Calligraphy is her secret talent

Way before she was a famous actress, Meghan did the calligraphy for singer Robin Thicke and actress Paula Patton's wedding invitations in 2005. Prior to landing a role on soap opera General Hospital, Meghan worked as a freelance calligrapher. To date, she has not lost touch with her calligraphy skills as she is known for sending hand-written notes using the fancy lettering.