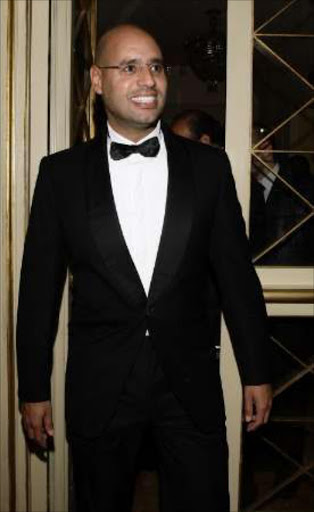 The group, calling themselves Topple the Tyrants, draped a banner on the roof of the 9-bedroom house calling for Gaddafi to get "Out of Libya" and "Out of London"

The activists draped a banner on the roof of the brick-built mansion calling for Gaddafi to get "Out of Libya" and "Out of London".

Police said they had made no arrests and that they were treating the occupation as a "civil matter".

The four-level house is advertised for sale on a local real estate website for 12.5 million pounds.

It has nine bedrooms, five reception rooms, a swimming pool, jacuzzi and its own cinema.

The squatters, calling themselves Topple the Tyrants, were sharing the occupation with demonstrators from the anti-Gaddafi British-Libyan Solidarity Campaign (BLSC), who climbed on the roof and waved flags.

"We want to show the Libyan regime they are finished and to make sure that Gaddafi has no place to come in Britain," Azeldin el Sharif told Reuters.

One of the squatters, who gave his name as Dariush, said: "We are occupying this house in solidarity with people fighting in Libya and we intend to hold it until it can be given back to the Libyan people."

He said they had found the building unoccupied but still furnished pending its sale.

Saif al-Islam is a former student of the London School for Economics, whose director Howard Davies stood down last week for accepting funding from a Saif-run charity.

Britain has frozen assets held and controlled by Gaddafi and his children. The Gaddafi family is reported to have billions of dollars of investments in London.

The London offices of the Libyan Investment Authority, which handles the country's multi-billion-dollar oil revenues, were also deserted on Wednesday.