Image: Gallo Images Yakhe Kwinana testifies attempted to implicate people who had not been notified that they would be implicated when she appeared before the Zondo Commission on November 02, 2020.

Kwinana tried in vain to redirect the commission in an attempt to evade answering on allegations previously levelled against her by several witnesses at the commission.

At the start of proceedings, Kwinana asked to make opening remarks before being questioned by evidence leader advocate Kate Hofmeyr.

Zondo granted the request and Kwinana used the opportunity to bring new evidence to the table.

She attempted to implicate people who had not been notified that they would be implicated.

This forced Zondo to halt Kwinana, saying she should have long ago submitted the evidence to the commission so it could be investigated properly.

“Why did you not give the names to the commission? I have been asking the public since 2018 to say anyone aware of corruption or acts of state capture must bring that information to the commission,” said Zondo.

Zondo interjected: “I do not know about you being here because of the Openwater report because my understanding is that you are here because certain witnesses have mentioned your name in a certain context with regard to the work of the commission.”

Kwinana continued insisting on mentioning the names, accusing the commission investigator of targeting her, but an impatient Zondo put his foot down.

“If you want to mention other people, you should have prepared an affidavit and submitted it to the commission mentioning those people so that they [can] be warned that you intend mentioning them,” said Zondo.

“When you have failed to do that over the past two-and-a-half years and you do that when we are in the tail-end of the commission, we may not be able to work on that information.

“When we receive something new ... we are in November 2020 and the intention is to conclude oral evidence by end of the year. If you had brought it to our attention much earlier, there might have been time to pursue it.”

Kwinana’s lawyer Lindelwa Mbanjwa tried to salvage the situation for her client, but Zondo was not moved.

“Ms Mbanjwa, I now stop you from addressing me. I have had enough of you, we need to move on,” said Zondo.

Kwinana remained hostile during questioning by Hofmeyr, who she accused of bias from the onset.

Kwinana was being grilled about approving a five-year contract for ground handling services at SAAT to Swissport without an open tender process in 2016. 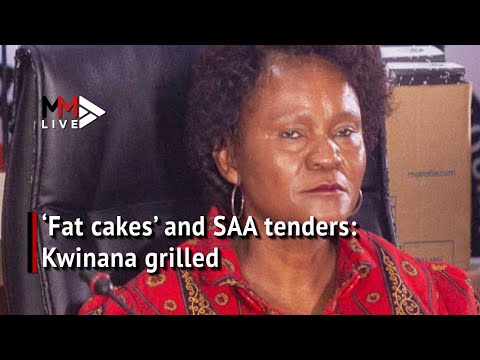