Nomgcobo Jiba gives up on getting job back

Advocate Nomgcobo Jiba has been barred from the public service. / ANTONIO MUCHAVE

Former deputy national director of public prosecutions, advocate Nomgcobo Jiba, yesterday gave up the fight to be reinstated by parliament at the National Prosecuting Authority (NPA).

In her response to a request by parliament for submissions in her defence for consideration in terms of section 12 (6) of the National Prosecuting Authority Act following her axing by President Cyril Ramaphosa in April, Jiba said she was moving on with her life.

"I have taken a decision to move on with my life. I do not seek any restoration by the parliament back to my position in the NPA. For this reason, I will not make any representations in this regard," she said in a two-page letter addressed to Speaker of the National Assembly, Thandi Modise.

Jiba added that "the reasons for my decision are personal".

"The entire matter has taken its toll on me and my entire family for close to five years. During these years, I have endured unmitigated hurt, stigmatisation and insults, all of which have no true factual basis at all," she said.

Jiba said she was deeply hurt by being labelled a "persona non grata" and permanently barred from ever serving in the public service in any capacity by Ramaphosa. "The presidential decree... was indeed hurtful to me," she wrote.

Jiba's decision comes after the Western Cape High Court last month ruled against her application to be reinstated pending her review application of the Mokgoro inquiry outcome, which found her to be unfit to hold office.

She filed the application after being dismissed by Ramaphosa following the outcome of the inquiry established by the president to assess both Jiba and her colleague, advocate Lawrence Mrwebi's fitness to hold office.

The inquiry's findings came after the Supreme Court of Appeal, in a majority judgment in July 2018, found no grounds to deem Jiba and Mrwebi unfit to hold office in an application by the General Council of the Bar, which also sought to have the pair struck off the roll of advocates.

The Constitutional Court upheld this judgment in June. 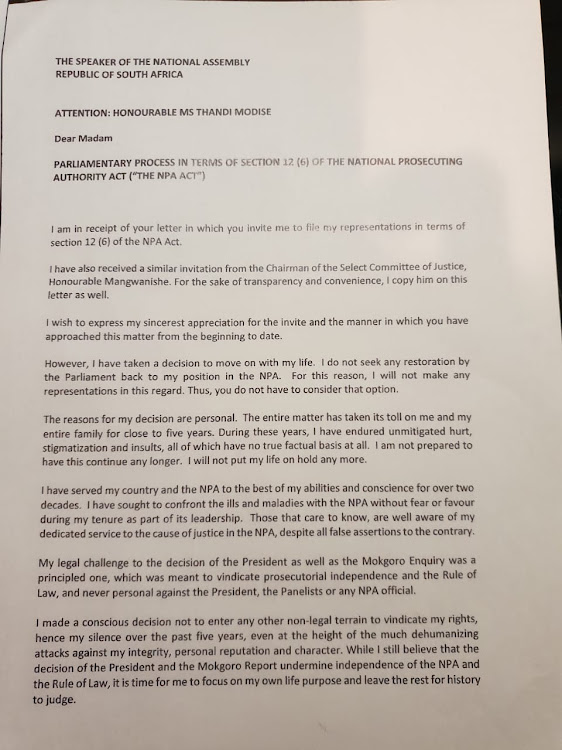 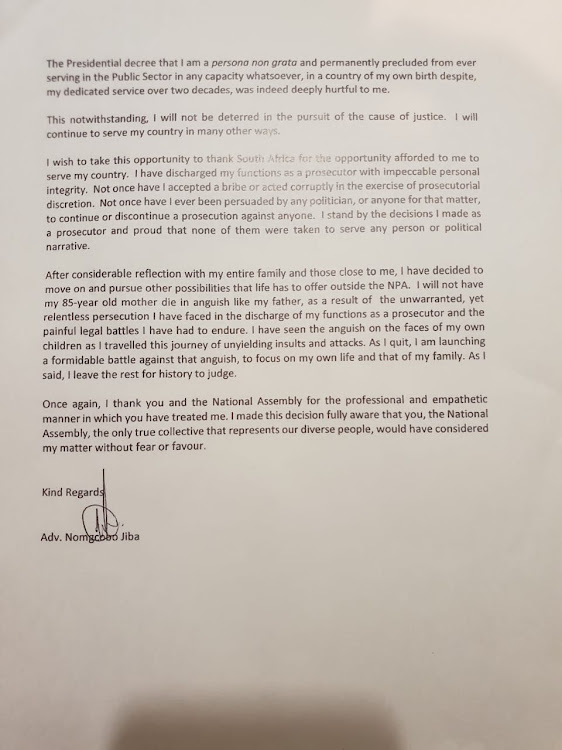