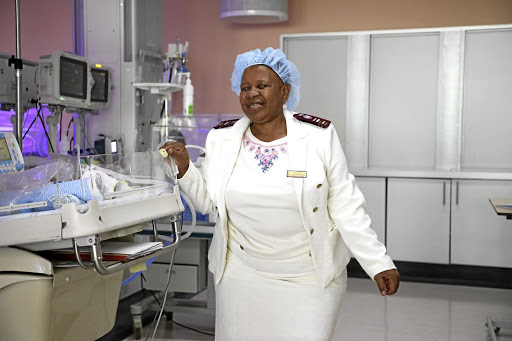 Noma-Afrika Selekane has helped save hundreds of premature babies, while making sure that the Charlotte Maxeke Johannesburg Academic Hospital runs one of the best neonatal units at Gauteng public hospitals.

Selekane, who spoke to Sowetan yesterday to mark International Workers' Day said her passion was the reason behind her successful career as the head of Neonatal High Care at the facility.

Selekane, 59, who trained as a nurse during the 1980s, manages the 35-bed facility, which caters for premature babies who have a high risk of contracting infections and dying due to their extremely low birth weight.

"My passion is working with premature babies. Even on my days off I will drive to the ward from home just to spend time with my babies. They are the best patients because they don't complain. If you feed them, keep them clean and give them their medication, they are happy," she said.

Selekane, who worked at the Mapulaneng Hospital in Bushbuckridge, Mpumalanga, before moving to Johannesburg 10 years ago, said nursing was more than a job to her.

"I have passion for nursing. People call me a super nurse because I go beyond the call of duty," she said.

The rape case against a Mpumalanga male nurse accused of sexual abusing two patients have been postponed to July for DNA results. The accused, ...
News
2 years ago

Selekane herself was born prematurely at six months.

In March, out of the 110 admissions, only six babies died. Five of them were micro-prematures - which means they were born with a birth weight below 500 grams. She said such babies were less likely to survive but in some instances "miracles happen". She recalled a 400-gram infant a few years ago. Selekane said the mother, from Springs in Ekurhuleni, was the first wife in a polygamous marriage.

"The younger wife had given birth to four children but this woman had suffered a couple of miscarriages," she said.

Selekane said the woman was concerned that even this baby would not make it.

"I would check on him before my meetings and other managerial duties. He was discharged from us at two kilograms," she said.

Selekane said she was invited to the little boy's first birthday party celebration. "I had to address the community and tell them about that little boy's journey. Miracles happen and I have seen them," she said.

Selekane, who is about to reach retirement age, she said wants to work more years, if possible, but is confident that she has trained her staff to carry on the good work.

"I have equipped them well. They know how to deal with premature babies and their families," she said.

Nurse drives through night so patient can get lifesaving kidney

When nursing sister Salome Siebritz learned that one of her patients had the chance of a lifesaving op, she knew what she had to do.
News
2 years ago
Next Article