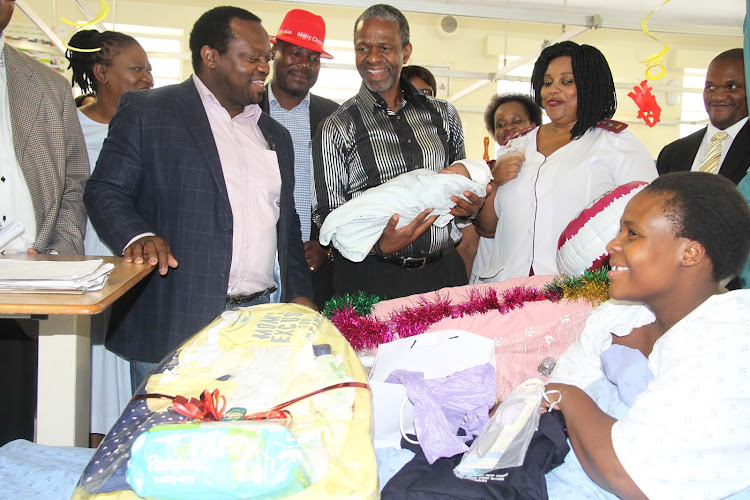 Fifty Christmas babies were born by 10am in KwaZulu-Natal – 26 girls and 24 boys‚ the health department announced.

Health MEC Dr Sibongiseni Dhlomo also called on people to give “the most precious gift” of blood‚ particularly during the festive season when so many accidents occur‚ including holiday-makers to the province.

The South African National Blood Service had told him that it has only enough blood in stock for two and a half days.

Although celebrating the birth of the Christmas babies‚ Dhlomo‚ who was speaking at King Edward VIII Hospital‚ had words for those mothers who didn’t regularly attend antenatal clinics‚ to ensure early detection of health risks for themselves and their unborn babies.

He also expressed concern that three of the Christmas Day mothers‚ who gave birth at Murchison‚ Newcastle and Mahatma Gandhi hospitals‚ are just 16 years old. “We are always concerned when young people fall pregnant at a young age because it is very unsafe. It actually places the mother’s own life and the baby’s in danger.”

He called on young people to either abstain from sex or use condoms.

Five reasons people hate Christmas... and who to call

It's the festive season and time to eat‚ drink and be merry. But Christmas holidays leave some people wanting to drown their sorrows.
Good Life
3 years ago

How to cope if you're having an unhappy Christmas

For all its hearty meals‚ shiny tinsel and forced goodwill‚ for many people the festive season is a major downer.
Good Life
3 years ago
Next Article