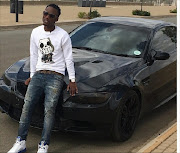 So Teko Modise wrote a whole book about having to bath in herbal water at Orlando Pirates. Big deal.

Unless the target audience is abongamla, every darkie player and fan knows about the use of intelezi by black soccer teams. It is as common as flies at a dumpsite.

My first encounter with the "bath" that Teko is talking about was back in the 1980s when I played for Liverpool FC (not the UK one).

I was only 15 years old and most of my teammates were in their late 20s.

We even had Gugamasokisi, a menacing, take-no-prisoners defender in his early 40s whose boots were as dangerous as those of Orlando Pirates' legend Johannes 'Yster' Khomane.

I had just returned from school on a balmy Friday afternoon when I was summoned to the "club house", which was actually the owner's palatial compound, much like Jacob Zuma's Nkandla palace. I was told to bring my soccer boots with me, which was a strange instruction since there was no scheduled practice that evening.

On my arrival, I found that the whole team had been ordered to be present. We were told that we would spend the night there as a team and we would be "prepared" for the one-day tournament the following day.

At midnight a medicine man came and ordered us to join him outside. There we found big enamel basins filled with cloudy water and floating crushed leaves. We were ordered to strip and take a bath. The medicine man didn't even have the decency to heat the water. It was cold as ice, but nothing prepared me for what came next.

The herbal bath made my skin itch like crazy, and we were not permitted to scratch or dry ourselves with towels. Then when we had air-dried, we were allowed to put our clothes back on and go back to the rondavel we had been occupying. There the medicine man had made a small fire and we had to jump over it several times while he kept sprinkling some muti, which choked the room in a vice grip of the foulest of stenches.

The following day, we failed to reach the finals. I told the owner that it was because we were exhausted from lack of sleep and the itchy bath didn't help either. We just couldn't focus.

He strongly disagreed and insisted that one of us may have "weakened" the effect of the muti by not using it "properly".

That was the first and last time I played for Liverpool. But it was not the last encounter with the muti bath in my 10-year career as a footballer.