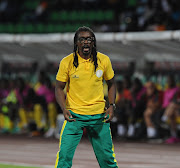 Senegal’s football federation has accused the French league of discriminatory behaviour after it imposed a blanket ban on foreign players at Ligue 1 and Ligue 2 clubs being released to play for their countries in next week’s window.

Senegal have been hit particularly hard by the decision of the French professional league (LFP) with 12 of the 26 players selected by coach Aliou Cisse for their African Cup of Nations qualifiers against Congo and Eswatini hailing from clubs in the top two divisions in France. The players are now unable to travel.

Senegal’s football federation said the ban was of a “totally discriminatory nature” and also against FIFA regulations. The LFP has not yet responded to a Reuters request for comment.

FIFA, world football’s governing body, said last month, in the wake of the COVID-19 pandemic, that clubs were not expected to release players if there were a "mandatory period of quarantine or self-isolation of at least five days upon arrival" in the country where the club is located or the country where the match is taking place.

"In this context, the clubs will not make available for selection the foreign players summoned for matches outside the European Union during the next international period in March," the LFP said on Wednesday.

In a letter on Thursday to their French counterparts, the Senegalese federation (FSF) said the blanket ban, which impacts on many other African countries going into the final two rounds of Cup of Nations qualifying next week, is against the rules.

It said the French clubs had exceeded the deadline to refuse to release a player, taking 12 days against a maximum of the six days allowed once a call-up is received.

In addition, the FSF accused clubs of not having attempted to contact French authorities to find out whether the players could benefit from an exemption from the seven-day isolation period imposed on travellers coming from non-EU destinations.

"Taking all these considerations into account, we would be grateful if you, in view of the very short deadlines and the damage incurred, kindly take the appropriate measures for the release, by the French professional clubs, players summoned by the Senegalese Football Federation,” the letter added.