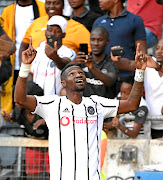 Mabasa's two goals in the space of two minutes in the early stages of the second half at Orlando Stadium gifted Mokwena his first win in charge of the Buccaneers. Mokwena succeeded Milutin Sredojevic, who resigned abruptly last month.

"Apart from just the goals that he [Mabasa] scored, the amount of work that he did. we asked him to do a lot of work on the three [Chippa defenders in] [Frederic] Nsabiyumva, [Boikanyo] Komane and [Kelvin] Moyo,'' said Mokwena.

"We asked him to do a lot of work in terms of assisting us with high press and helping us to press and defend in smaller areas, he was outstanding.

"[In terms of] his movement of the ball, there's still a lot of work to be done.''

The Bucs mentor also spoke fondly of Mabasa's personality. The 22-year-old sharpshooter joined the Sea Robbers from Bloemfontein Celtic before the start of the season, having bagged 10 goals across all competitions the previous term.

"A thing that the media does not see and the supporters don't see is what a great human being the boy is. extremely intelligent, understands tactics [and] understands the game. But at the same time he's so humble and coachable,'' Mokwena stated.

While Mokwena was relieved to finally register a win, he feels they could have done better. Lerato Manzini scored Chippa's consolation goal .

Mokwena also acknowledged they have to step it up a gear in their next match against Bidvest Wits at Moses Mabhida Stadium on Saturday (8.15pm). The match is in Durban because Bidvest Stadium is undergoing renovations.

"Wits are another difficult one. a well-coached team with a very experienced coach [in Gavin Hunt] that knows how to win and with a very, very strong defence. You are going to have to work very hard to able to get through the Wits defence,'' Mokwena stressed.