WATCH | Messi finally arrives in SA with his Barcelona colleagues

By Mahlatse Mphahlele at OR Tambo Airport 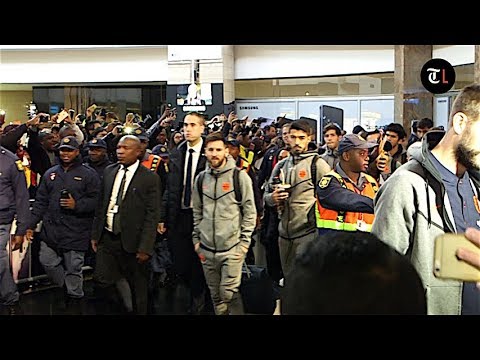 FC Barcelona have touched down at OR Tambo Airport in Johannesburg for their hugely anticipated Nelson Mandela Centenary Cup encounter against Mamelodi Sundowns at FNB Stadium on Wednesday (6pm).

The Catalans were supposed to land around 6am but only touched down in South Africa after 8am following a delay of their long haul flight from Barcelona leaving fans and a huge contingent of local media waiting.

Lionel Messi is here! Excitement as @FCBarcelona arrives at @ortambo_int in Johannesburg ahead of their @Masandawana clash. Video courtesy: @BraMahlatse #SundownsBarça pic.twitter.com/zWHcwTr3ZT

They headed straight to their bus under heavy security and police guard and without speaking to the media with the contingent only smiling at the cameras and waving to the crowd who came to see them.

They will take a break at their hotel for a few hours before making their way to the scene of Spain’s World Cup triumph in 2010‚ where Iniesta scored the winning goal against Netherlands in the final‚ for the match against Sundowns tonight.