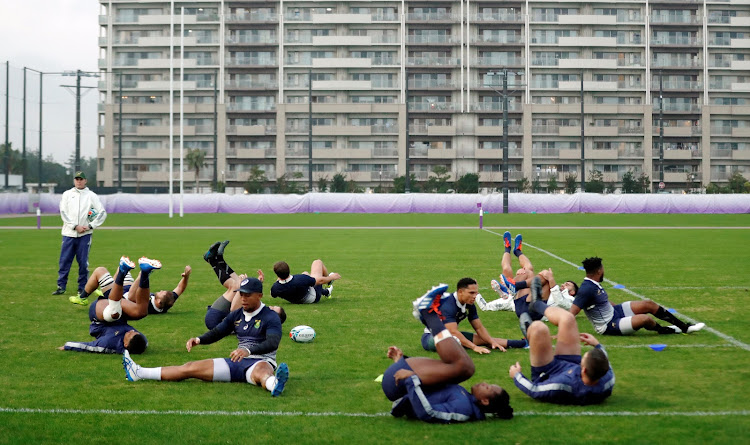 It is hard to discern fantasy from reality now that the Springboks have returned to their Tokyo Bay haunt.

In the build-up to Saturday’s Rugby World Cup final against England‚ they are back in residence next to Tokyo’s sprawling Disneyworld complex where they did much of their preparation for their opening match against New Zealand.

A week ago‚ when England coach Eddie Jones and his team made the same hotel their temporary home‚ many wondered whether he was shooting straight with comments about how the pressure is on the All Blacks as well as his assertion that the New Zealand media were fans with keyboards.

The question now is whether Rassie Erasmus potentially has lines blurred about the make-up of his match day squad‚ as well as the tactics the Boks are most likely to employ in Saturday’s final.

Erasmus had made it clear apart from the reintroduction of wing Cheslin Kolbe that he was likely to stick to the same players that did duty in the semi-final.

He also re-emphasised the point that the Bok tactics have to remain the same given the short six-day turn around between their semi-final and Saturday’s final.

Some in the British press found it odd he should so generously share such information early in the week leading up to a World Cup final‚ he was pointedly asked whether he was bluffing.

“We have 160 minutes to train on a six-day turn around‚” said Erasmus. “There is not a lot we can change between those two training sessions."

"If we had a seven or eight-day turn around I might change things.

"There might be one or two new starter moves or something like that. There is not a helluva lot you can change in your tactics in six days‚” said the coach.

In his formative years as a coach however‚ Erasmus was known for using the odd ruse‚ or drawing something from left field.

His roof fitted disco lights innovation certainly raised a few eyebrows when he was at the Cheetahs.

He is a strategist at heart and is drawn to doing things that may not immediately blip on the opposition’s radar.

He’s even got wily England coach Jones in two minds.

“Rassie is a cunning coach and has done a great job with the Springboks‚” said Jones.

“We are prepared for the unexpected and they can play different ways. The only thing we are really worried about is how the Springboks turn up on Saturday.

"They won a tough semi-final and when you are in the final of the World Cup you have done a lot of good things right.

“They are a massively aggressive forward pack and they played their stronger team in the second half as opposed to the first half.

"They are going to be a difficult side to beat but we will enjoy the preparations.

"We know a couple of areas where we think we can expose them and will make sure we are good in those areas.

“They can play differently but also know they can come through the front door.

"Not many Springbok teams you play don't come through the front door so we will be ready at the front door and have enough cover for the back door if that happens.”

Whether Erasmus is bluffing may partly be revealed through his team announcement on Thursday.

The wags and the offspring of the Springboks may be luxuriating in this precinct of fable and fantasy but ahead of the most important match of his life Erasmus insists‚ he not kidding.