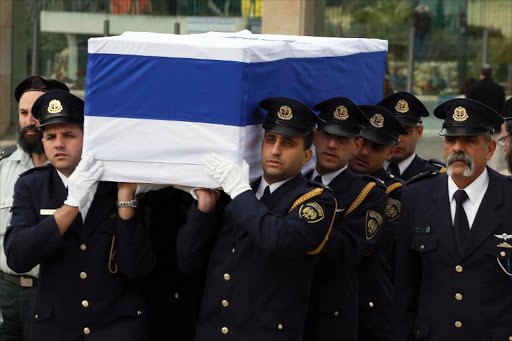 Sharon will be laid to rest in a ceremony at his family's Sycamore Ranch in the southern Negev desert, which lies a few miles from the northern border of the Gaza Strip.

Israel was on Monday set to bury former prime minister Ariel Sharon, celebrated as a military hero at home but loathed by Palestinians as a bloodthirsty criminal.

Sharon will be laid to rest in a ceremony at his family's Sycamore Ranch in the southern Negev desert, which lies a few miles from the northern border of the Gaza Strip.

Affectionately known as "Arik" among his loyalists, Sharon will be buried next to his second wife, Lily, after a military funeral at 1200 GMT.

The former general will be eulogised by his two sons, Gilad and Omri, and by armed forces chief Lieutenant General Benny Gantz.

The white-haired former general had been in coma since January 4, 2006, following a massive stroke which felled him at the height of his political career. He was 85.

Ahead of his funeral on Monday, Sharon's flag-draped coffin was placed on a black marble plinth in the plaza outside the Knesset, or parliament, for the public to pay their last respects.

A procession from the Knesset to the ranch will pause for a ceremony at a military memorial site in Latrun, west of Jerusalem, where Sharon was wounded in the 1948 war of independence.

With thousands of people expected to attend the funeral, police and the army have beefed up security arrangements.

Channel 2 television said the army had changed the deployment of the Iron Dome aerial defence system batteries in the area to defend against possible rocket attacks from Gaza, which is ruled by the militant group Hamas.

Prior to the funeral a state memorial service will be held at the Knesset from 0730 GMT and will be attended by Israeli and foreign leaders, including US Vice President Joe Biden.

Some 20,000 people from all walks of life filed past his flag-draped coffin on display at the Knesset on Sunday.

Once known chiefly as a ruthless military leader who fought in all of Israel's major wars, Sharon switched to politics in 1973, championing the development of Jewish settlements in the occupied Palestinian territories.

He was long considered a pariah for his personal but "indirect" responsibility in the 1982 massacre of hundreds of Palestinians by Israel's Lebanese Phalangist allies in Beirut's Sabra and Shatila refugee camps.

His early career as a warrior earned him the moniker "The Bulldozer" but most world leaders chose to remember the politician who surprised many by masterminding Israel's withdrawal of 8,000 settlers from Gaza in 2005.

That move was part of a policy of separation from the Palestinians that earned him the hatred of his former nationalist allies and also led to the construction of a sprawling barrier along Israel's border with the West Bank.

Born in British-mandate Palestine on February 26, 1928, to immigrants from Belarus, Sharon was just 17 when he joined the Haganah, the militia that fought in the 1948 war of independence and eventually became the Israeli army.