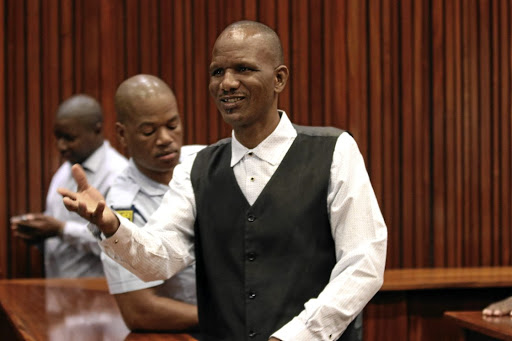 Edward Raatji, one of the two men found guilty of the murder of a 16-year-old girl. The men were acquitted of a second charge of possession of human body parts.
Image: ANTONIO MUCHAVE

One of two men convicted of killing a 16-year-old girl has asked the Limpopo High Court to grant him periodical imprisonment.

Edward Raatji, 52, who insists he is not guilty, asked for the sentence because of his ill-health.

According to the Criminal Procedure Act, periodical sentencing means Raatji would serve his time in prison during the week and be released on weekends or vice versa.

Stanley Mohlake, 32, and Raatji are standing trial for the murder of Nthabiseng Mosomane from Mapela village outside Mokopane.

They were arrested in July after being found at a taxi rank in Polokwane in possession of a human skull and genitals.

They were initially charged with murder and possession of human body parts, but later acquitted of the second charge on a technicality.

"I suffer from depression and chronic illness. I sometimes lose conscious (sic) and this started after I was brutally attacked a few years ago," Raatji said.

He said if the court imposed his desired sentence, he'd be able to take his medication and look after his seven children.

Raatji, a second-year LLB student at the University of Venda, told the court that the bag that had been found with human parts inside belonged to Mohlake.

Mohlake yesterday dismissed this allegation. "During the arrest he told the police that everything in the car belonged to him. I didn't know there were human parts in the car and I was surprised when the police made such a gruesome discovery," he said.

Mohlake also asked the court to provide him with trauma counselling and keep him far away from Raatji.

"I regarded him as a father and I was very angry with him after the arrest," he said.

"I'm deeply hurt about what has happened and I ask God to give the Mosomane family strength to overcome the issue."

Mohlake said he had played no role in the murder of Mosomane.

After the arrest of the two, enraged community members burnt their family homes along with everything inside.

Raatji told the court that during the torching of his house he had lost over R300000 from his pension fund and his mother had lost R85000 which she had got after selling her tractor.