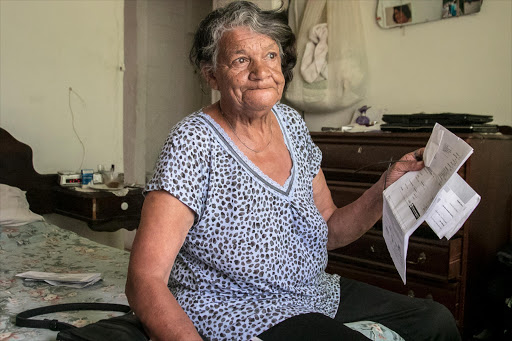 Woolgar said that last week she was visited by officials she did not recognise and law enforcement officers. Her crime? “They told me I was the biggest water consumer in Manenberg.’’

She owes the city exactly R41 364‚60. That will make her the second highest water consumer in the city.

Woolgar has no idea how this is possible or how her consumption became so “unacceptable’’ and ‘’excessive’’.

Last week the City released a list of street names where its highest water consumers live. They did not disclose the names of the individuals.

Woolgar lives on her pension of about R1500 a month‚ with her unemployed son and an unemployed tenant. The two-bedroom home on the Cape Flats once belonged to the council but about 30 years ago she bought it for about R4 000.

Previously her bill rarely exceeded R300; she paid R285‚70 in October last year. Then she was slapped with a bill of about R4 000 and so the figure continued to rise.

“Even if I should win money to pay the bill‚ it will not be good enough because we don’t know what the problem is‚’’ she said.

She cannot afford a plumber so her brother dug a hole in the ground to look for a leak. They also tore tiles from the wall in her bathroom and made a hole to inspect the pipes there.

Her son turned off the main tap. They only open it for short periods when it is necessary and they recycle the water.

“The only problem I can think of is the water meter which makes a fast tik-tik-tik-tik sound‚’’ said Woolgar.

The letter from the mayor warned her to take action or she will be fined.

A Manenberg community activist‚ known only as Gatto‚ slammed the city for allowing leaks to get. He said Manenberg’s infrastructure is falling apart and residents are too poor to do anything about it.

“There is enough water in Cape Town — on the mountain‚ the aquifers. But there is mismanagement of the resources by the city‚’’ said Gatto‚ who has also tried to assist Woolgar.

Earlier this week Rashid Khan‚ head of the water and sanitation department in the Western Cape‚ slammed the City for wasting water because of leaks.

“What they are finding now is that they haven’t done enough because there are leakages. That is unacceptable. You can’t have this in this time‚’’ he told TimesLIVE on Thursday.

The City hit out at criticism about the data they released. They maintain the information they released is correct.

“According to our records‚ not one of the households reported a leak through the City’s many channels or sought any kind of assistance from the City‚’’ the statement read.

“It must be borne in mind that the responsibility lies with residents to monitor their water bills‚ to identify leaks – even if these emanate from underground pipes on their property – and to have them repaired. Leaks constitute consumption: the bigger the leak‚ the higher the consumption. The City is mandated only to maintain the pipes up until the boundary of privately owned properties.’’

Woolgar admitted that she did not contact the City directly when she first noticed the spike in her consumption. “Surely they can see there is a problem? They have all my information.