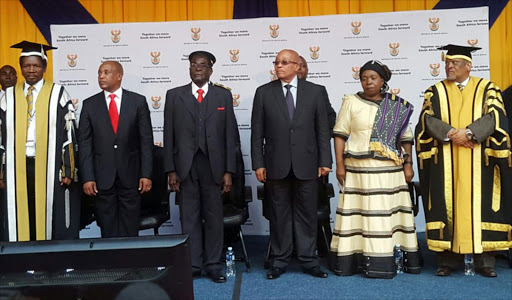 Zimbabwean President Robert Mugabe says he has decided to stay on as president as he wants to prevent regime change that‚ he says‚ has been promised by the United States.

Mugabe‚ who has been president of Zimbabwe since 1987‚ said the United States had said publicly it wanted to effect regime change in Zimbabwe.

“I am hanging on because I want to prevent regime change. It will never come‚” Mugabe said‚ to the applause of the assembled guests.

Mugabe‚ who studied at Fort Hare and graduated with a Bachelor of Arts degree in 1951‚ said it had been a long struggle by Africans to prove that they were equal to other races.

He said Africans had proven they could run their own affairs.

“Let products from here truly represent what our elders sought to make students become in life: Leaders of people who were courageous but educated.”

Mugabe said when Zimbabwe became independent‚ he decided that every child had a right to education‚ not just primary but also tertiary.

He also said he decided to accelerate gender equality‚ starting with the education of a girl child.

He said Zimbabwe did not have many universities at the time.

He said during 1995 and 2016‚ a scholarship fund saw 3‚679 Zimbabwean students completing their studies in South African institutions‚ 3‚010 of whom graduated from Fort Hare.

Mugabe said now that Zimbabwe had 14 universities‚ the numbers of Zimbabwean students being sent to South Africa had dwindled.

He said he did not want the scholarship fund to die completely.

“Although we have reduced numbers‚ we will maintain the scholarship to Fort Hare as a tribute of what it has done‚ its African-ness‚ the history of the ANC and the making of the African nation. That is the history we share‚” Mugabe said.

On gender equality‚ Mugabe said they had a tradition that boys deserved to be educated‚ and that girls would get married when they turned 18.

“But now‚ I said ‘Let’s educate them on an equal basis’‚” Mugabe said.