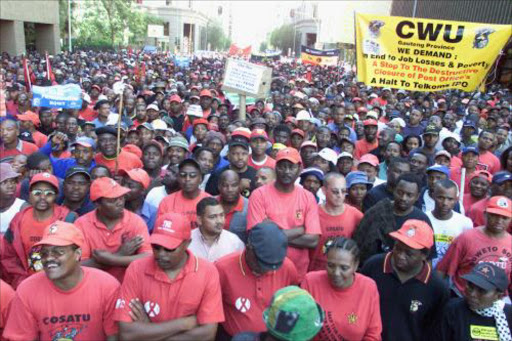 Unions have complained about political interference in disciplinary cases in the public service.

The unions - Nehawu, Sadtu, Popcru and Denosa (all Cosatu affiliates), the independent Public Servants Association (PSA) and Health and Other Services Personnel Trade Union of South Africa (Hospersa) - have told the Public Service Commission (PSC) that state employees are not treated equally based on friendship, union and political affiliation.

The PSC has undertaken to establish whether there is a link between what the unionists view as manipulation of disciplinary cases by management or politicians.

According to the commission's study, dated March 30 2016, it received 70 responses from organised labour representatives from the six unions, which represent the majority of the government's over 1.3 million employees. l Public sector union Nehawu is Cosatu's largest affiliate with 277317 members;

Teacher union Sadtu has 248556 according to figures tabled at the federation's congress in November;

Hospersa has above 69000 members, according to its president Masale Selematsela.

Selematsela said there were complaints of these practices from their shop stewards.

The PSC admitted that subjectivity in handling disciplinary cases and dispensing of sanctions is a serious problem facing the public service.

In the worst cases, a certain number of cases take between four and seven years or more to finalise.

According to the unions, harsh action is taken against junior public servants while their errant bosses are treated leniently.