Application made to allow cameras into Sithole court appearance 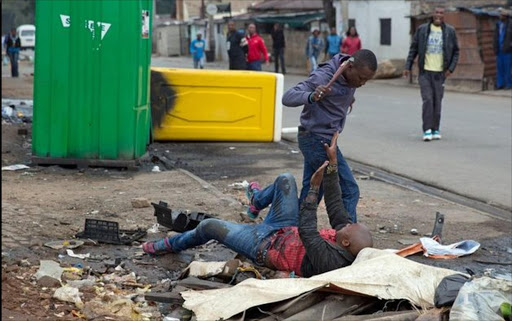 A camera captured the killing of Emmanuel Sithole and led to the rapid arrests of four suspects.

If the Department of Justice gets its way‚ cameras will be present when the alleged murderers make their first appearance in the Alexandra Magistrates Court on Tuesday.

Eye Witness New tweeted earlier this morning that the justice department’s “Mthunzi Mhaga is at court trying to get permission for cameras to be allowed inside the courtroom”.

Mhaga confirmed this to RDM New Wire this morning‚ explaining that the “public interest” in the case warranted an application to be made to the magistrate “to get you guys in”.

A fourth man arrested for the killing of Sithole overnight will the join the three suspects who were already in custody when they appear in the Alexandra Magistrates Court on Tuesday.

Mozambican Sithole’s murder on Saturday was captured by Sunday Times photographer James Oatway‚ and the images of the brutal death prompted police to offer a reward of up to R100 000 for information leading to the arrest and conviction of the culprits.

A heavy police presence wass expected in the area around the court on Tuesday when the four men appear as there has been a huge public outcry following the publishing of Oatway’s images.

Representatives from the Mozambican embassy and of Sithole’s fmaily were also expected in court.

President Jacob Zuma made mention of them on Monday‚ when he said the publication of the photographs made South Africa “look bad”.

Police on Monday said that the man seen stabbing Sithole was amongst the first three to have been taken into custody. The arrests on Sunday night were‚ reportedly‚ made with the help of the community.

Yet‚ following the attack‚ Oatway received grudging support when he attempted to remove Sithole from the scene and get him to medical help.

“Help me get him into the car. Help me‚ please‚” said photographer James Oatway‚ looking around at men gathered around him. One stepped forward‚ reluctantly.

Sithole was taken to the nearby Alexandra Day Clinic‚ where nurses did what they could‚ but as there was no doctor – he was apparently absent from the facility as he feared being attacked — he was eventually taken to the Edenvale Hospital.

Shortly after 9am‚ Sithole was pronounced dead.