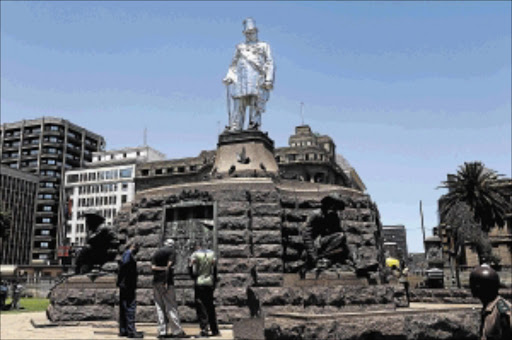 UNWANTED: Above is the statue of Paul Kruger in Church Square, central Pretoria Photo: Alon Skuy

The Tshwane municipality is mulling over calls to rename Church Square and also the removal of the statue of Paul Kruger in the city centre.

Tshwane mayor Kgosientso Ramokgopa is to host a public hearing next week Tuesday, where both items will be debated.

But the ANC Youth League says it will march to the mayor's office next Monday to deliver a memorandum on the demand.

"We will march to the mayor's office to hand over a memorandum on April 6. We chose this day to honour the memory of struggle hero Solomon Mahlangu," Tshwane ANC regional youth leader Lesego Makhubela told Sowetan yesterday.

Mahlangu, a member of the ANC's then armed wing Umkhonto weSizwe was executed by the apartheid regime on April 6 1979 at Pretoria Central Prison (now Kgoshi Mampuru II prison).

But Ramokgopa's spokesman Blessing Manale said "the mayor is aware of the call by the ANC in the region to remove the statue of Paul Kruger".

"The call was made over the weekend at a gathering," he said.

Manale said the calls to rename Church Square had been there for many years now, and the city was already "in the process of hearing proposals and recommendations of what can be done".

Makhubela said the ANC in the province was in support of calls to "reclaim" the city. "We cannot still have that statue in an important area in the middle of the city .

"He [Paul Kruger] does not stand for or represent anything in this democratic country," he said.

The DA in Tshwane said it did not support the proposals, but could not confirm whether it would be willing to take the matter to court. Christo van der Heever, the spokesman for arts and culture in the Tshwane council, said: "The statue and the square is part of our of South African heritage, we can't just erase that history. We can't say what will happen yet, so we will act depending on the outcomes of any decision taken by council."

The calls to remove statues associated with apartheid have been gaining momentum nationally.

At the University of Cape Town, students are campaigning for the removal of British colonialist and Rhodesia founder Cecil John Rhodes from the campus. There are also calls to change Rhodes University's name in Eastern Cape.