The strong spirit of women 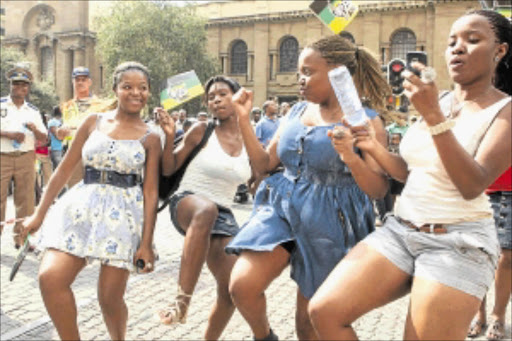 RAIN failed to dampen the spirits of hundreds of women and men who joined a march organised by the ANC Women's League to highlight the plight of two women who were verbally and sexually harassed at the Noord Street taxi rank in December.

The marchers, led by Gauteng premier Nomvula Mokonyane and Minister of Women, Children and People with Disabilities, Lulu Xingwana, made their way through the streets of Johannesburg from the Bree Street taxi rank to the Johannesburg High Court in Pritchard Street where a memorandum was handed over to Justice Minister Jeff Radebe.

Marcher Millicent Makhubela told Sowetan how she felt about abusive taxi drivers: "We always get insulted when we pass taxi ranks.

"Old men, fathers of kids and uncles call us names such as whore, bitch or slut.

"This is a democratic country. We are free to wear whatever we want - be it a short skirt or a see-through top with a bra."

Makhubela thinks that men who feel that women are wearing inappropriate clothing should pull them aside and say that they are not comfortable with their choice of dress.

"We do respect culture but our elders need to understand that we have the freedom to express ourselves by what we wear," she said.

Charity Thembeni Manana, who also took part in the march, said: "Members of the opposite sex should be supporting us in everything that we do.

"Taxi ranks are well known for rude and insulting men who have no respect for women.

"What these people forget is that they are insulting a generation that they gave birth to."

Wearing shorts, marcher Rachel Chabangu said: "These men, half the time, are the ones who buy these kind of clothes for us but at the end of the day they do not want us to wear them."

Boitumelo Maneng believes that a child belongs to and is raised by a community, however, "I do not feel safe in my community anymore. These people who I should be respecting are the very same people who insult us when we walk near taxi ranks.

"They make us feel ashamed of ourselves and uncomfortable even when we are wearing pants."

For those wishing to pledge their support against abusive taxi drivers, an additional march is being held in Sunnyside, Pretoria, on March 8.