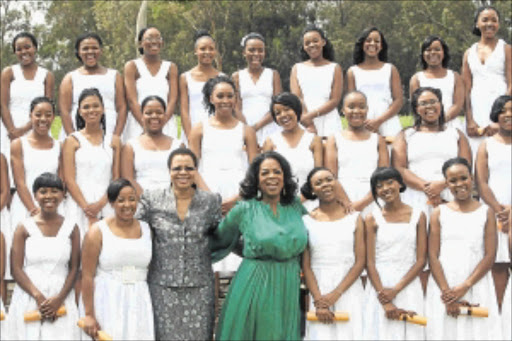 THE Oprah Winfrey Leadership Academy for Girls' plan for achieving a 100% pass rate for the matric class of 2012 is to get a head start in the academic year.

Though the academy officially reopens today, the 69 grade 12 pupils started with lessons on Monday. Teachers began preparations two weeks ago.

Academy head Anne van Zyl said: "Everything is ready and waiting for the girls."

With a goal to maintain the 100% pass rate, Van Zyl said: "By ensuring that the girls do their very best, we expect them to return early from holidays and attend Saturday classes."

In the grade 8 class, there are 48 pupils, all of whom began their studies at the academy last year - in grade 7.

Van Zyl said from next year the academy would no longer have grade 7s, adding that the admission process for the next grade 8 class was already under way.

Specifying what kind of girls qualify to be a part of the academy, Van Zyl said that economic, social and academic aspects were considered.

"The first round we check the girl's economic criteria. Her household should not earn more than R8000 a month. We measure her English and maths ability, also looking into her leadership potential, which is in the second round. But most of all she should be keen and enthusiastic," Van Zyl said.

Addressing a graduation ceremony for the matric class of 2011, Graça Machel said: "Being a woman in the 21st century is a huge challenge, but you need to put yourself within history and say who you are."

Machel, who is the wife of former president Nelson Mandela , said the girls should never forget where they came from and appreciate the women of past generations who helped pave the way for them.

"Stay humble and grateful to generations of women who have come and gone," said Machel, encouraging them to never forget that anything is possible.

"There's nothing a woman can't achieve in the 21st century, though many African women face a huge challenge of culture and suffering," Machel said.

A proud Winfrey, whom the girls call Mama Oprah, accompanied by partner Steadman Graham, confessed her concern for the girls.

"As a mother, I'm a little worried that they are leaving a disciplined environment to face a world of too much partying and pressure. I wonder if they'll manage their finances and responsibilities. Will they always do what is right?"

Winfrey plans to maintain relations with the girls.

Bongeka Zuma of KwaZulu-Natal, who was named the OWLAG Dux scholar for 2011 as a top student, said: "I'm very proud of myself. I didn't expect to get the DAX award."

Zuma obtained six distinctions and is preparing to study international relations at Stelman College in the US.

Mashadi Kekana of Alexandra, northern Johannesburg, obtained five distinctions. She is due to study at Wellesley College in the US.

She said: "It's quite overwhelming and it will take a while to sink in. It's always been my goal to do well. I worked hard and I'm glad it paid off."