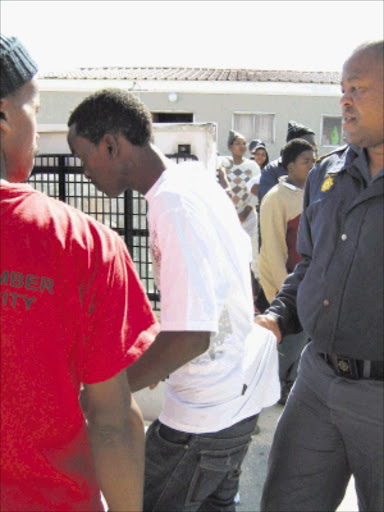 POLICE had to rescue a man who had allegedly raped and molested seven children in Delft, Cape Town, from a mob.

This was after the police had first refused to arrest the alleged rapist, saying the community must first provide them with his name.

The 21-year-old man, who may not be named because he has not yet appeared in court, was confronted by angry parents at the weekend.

The five girls and two boys - aged between five and seven - alleged that the man had either raped them, or showed them pornographic movies and magazines.

When Sowetan arrived on the scene distraught parents did not want to comment.

Dozens of angry Delft residents said that they would beat the suspect to a pulp.

Police and community leaders stepped in. Community leader Nomfundo Khube said a parent heard her child complaining about pains in her genitals and found a discharge when she examined her.

Khube said at first the police refused to open a case. "The police said they couldn't open a case without the suspect's name. So the community had to go to where he lives to fetch and grill him," she explained.

She said during the grilling the man admitted that he had shown the children pornographic movies and magazines but denied having raped them.

Area committee leader Sobantu Nofotyela said if the suspect were granted bail they would drive him out of the community.

One of the residents, speaking on condition of anonymity, lambasted the community leaders for their action.

The suspect's friend, also speaking on the condition of anonymity, said: "I am surprised by the incident.

"This guy lives with his girlfriend. I don't know how he did this. But I am just here to give him support," he said outside the Delft police station.

Police spokesperson Joe Wilson said a case of sexual assault had been opened and the suspect was to appear in the Bellville magistrate's court today.