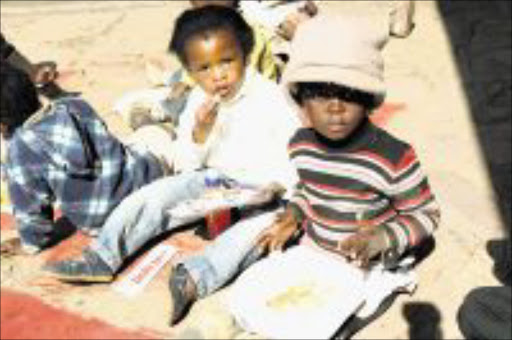 SUSAN Lithuli realised that her little charges were dejected when they came back to nursery school after the weekend.

SUSAN Lithuli realised that her little charges were dejected when they came back to nursery school after the weekend.

She paid visits to their families and discovered that most of them were unemployed or sickly. The children live in shacks or rented rooms in Jabulani, Soweto.

"Most of the children at Emma Brosius are orphans whose families survived on child grants. Their caregivers are unemployed. They cannot afford to pay the modest fees we charge. They are also unable to give the children a snack for the afternoons," Lithuli said.

Emma Brosius Crèche has 94 children in five classrooms. They are taught by five teachers who have undergone Early Childhood Development Training.

Lithuli, the principal and owner of the crèche, appealed to Mama Angel for help in feeding her small charges.

"We can feed the children from the little we charge. But the money also pays salaries for the teachers, two cooks and a gardener.

"We need to give everyone an afternoon snack and a food parcel to enjoy at the weekend."

The nursery school started a vegetable garden on Nelson Mandela Day. About 46 members of the community came to lend a hand. Captain Dorego added to the festive air by donating lunch.

Sowetan deputy editor Len Maseko, who was giving the crèche his 67 minutes of Letsema, noticed the determination of the struggling band to improve themselves.

"We are doubly grateful to Len Maseko and Lindi Obose of Mama Angel for the help they have given us," Lithuli said.

"We will be able to give the children a food parcel to tide them over the weekend. We will explain to the parents that the food is mainly for the children."

Lithuli said she had arranged with social workers to help families access grants and identity documents and birth certificates for the children.