Naledi Chirwa: Voice of the voiceless 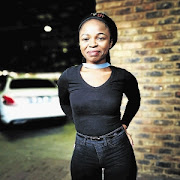 Naledi Chirwa has taken the bull by the horns as EFF's youngest comrade.

The young and bold Naledi Nokukhanya Chirwa, 25, is the EFF's youngest fighter in the National Assembly.

She has swapped her acting hat for politics.

Chirwa says her initial dream was to become a Hollywood movie star, but now her dreams have shifted.

She officially joined the EFF as a member in 2015 and served as media and communications officer for the student command.

The masters student in theatre and performance at the Witwatersrand University in Johannesburg, says she is excited for the task to serve as a public representative.

"The liberation and economic freedom in our lifetime is a dream. On a personal level, I am an artist and like every other artist, liberty and political consciousness is our founding principle and drive. I don't have any expectations besides the fact that we are there to ensure that the lives of black people, black woman, black youth, black LGBTQI, black children are secured and liberated from colonial and postcolonial destruction perpetuated by the ruling party," she says.

Born in Vosloorus on the East Rand and raised in Mamelodi, Pretoria, Chirwa adds that she grew up in a politically-charged home with her mother being very vocal about worker's rights and her grandmother about women's liberation.

She says she joined politics because it's a strong tool to confront injustice and inequality.

She also served as a deputy president of Tshwane North College FET (now TVET) in 2009 at the tender age of 15.

Chirwa demonstrated that she is not afraid to speak her mind and to fight for what she believes in.

She made headlines about three years ago when she and three other activists staged a silent protest against former President Jacob Zuma. During the Zuma's speech at the Independent Electoral Commission results centre in Pretoria, they held posters reading "remember Khwezi" in support of the woman who accused Zuma of raping her 10 years ago.

The single mother of one says to those young people who aspire to be like her: "Be yourself. Never depart from the ground. The ground is our permanent home. It's our collective duty to deliver economic freedom in our lifetime," she says.

But she also hasn't abandoned her dream of becomming a big screen star.

"My dream is still making movies and to tackle the decolonisation project of our education system," she says.