Striker’s age counts against him 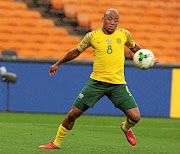 Some have urged Bafana Bafana coach Hugo Broos to consider calling up the 31-year-old striker, while others feel the national team is OK without him. Broos has been showing faith in home-based strikers, mainly Baroka’s Evidence Makgopa  and Victor Letsoalo of Royal AM. The pair have netted a combined eight goals in the DStv Premiership this season.

Makgopa, 21, has managed two goals while the 28-year-old Letsoalo has scored six times.

Ndlovu has netted an impressive nine goals, including what’s arguably the contender for goal of the season, from 11 league outings for his Turkish second tier side Kocaelispor.

“It’s a difficult one. But when you’re on form you should be called up for the national team. Every player wants to play for his country and Dino has shown that by honouring call-ups in the past. At this moment, I would go for him because of his form. I really think Bafana need him going forward,’’ Mphela said.

Even so, Killer is mindful that age can jeopardise Ndlovu’s chances of playing for the national team under Broos, who made it clear he will prioritise players under the age of 30, when he arrived in May.

“Again, age could be a problem because the coach [Broos] prefers younger players. At the end of the day the coach knows what he wants and ours is just to support whoever he decided to play because he now knows SA players,'' noted Killer.

Since leaving SA for overseas in 2015, Ndlovu has managed to score more than 110 goals for various clubs such as Bnei Yehuda Tel Aviv of Israel, Cyprus’s Anorthosis Famagusta and Garabak in Azerbaijan.