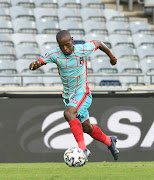 Now that they have returned to winning ways, TS Galaxy are hoping to use that momentum when they host TS Sporting in the Nedbank Cup first round at Ellis Park tomorrow (3pm).

Galaxy have had some decent results in their past three matches in the DStv Premiership with victories against Maritzburg United and Black Leopards  and a draw with Orlando Pirates away.

As they prepare to face Sporting in the Mpumalanga derby, midfielder Lindokuhle Mbatha said the confidence is high in the team, and they are looking forward to progressing to the next round.

“Everything is now going well since coach Owen da Gama joined us. He brought confidence to everyone in the team [stressing] that we must work hard,” Mbatha told Sowetan yesterday.

“Where we were before, we were not supposed to be there. Everyone has been working hard, and that has helped us to get these results so we can finish in a better position at the end of the season.

“At least we managed to get out from the bottom position on the table. If we were still there, I would say no, let's focus on our bread and butter.

“You can still play the Nedbank Cup even next season if you are still in the league, so our focus now is both competitions. We want to do well.”

Galaxy decided to host Sporting at Ellis Park in Johannesburg rather than at Mbombela as that would have given their provincial rivals an advantage, since they are based there.

Despite not having watched many of Sporting's games this season, the 35-year-old said they will know what to expect when they face them.

“I won’t say we know them. We watched Sporting a bit but we managed to see them when they played against Cape Town Spurs. We saw how they play and how we can stop them,” he said.

“It would have been difficult if we were playing a team from the ABC Motsepe League because we don’t know them at all. So this one we saw them a bit, and we know what to expect,” Mbatha said.